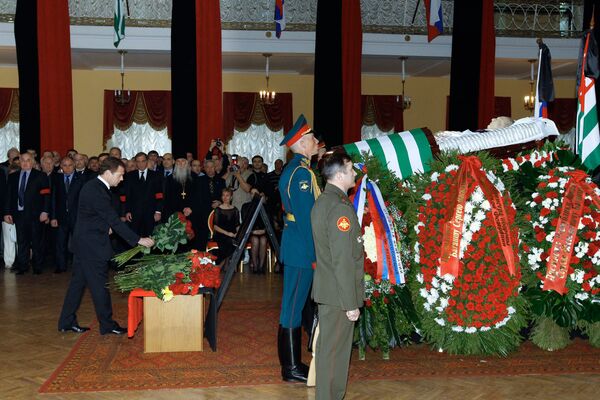 Russian President Dmitry Medvedev attended a memorial ceremony for Abkhaz leader Sergei Bagapsh on Monday and laid red roses by his side.

Bagapsh, 62, died after undergoing surgery on his right lung at a Moscow clinic.

A mourning ceremony is being held in Moscow on Monday, after which his remains will be flown to Abkhazia. The funeral in Abkhazia will be held on June 3, a source in the Abkhaz presidential administration said. Bagapsh will be buried in the village of Dzhgerda in the Ochamchira district where his parents were buried.

Russian Foreign Minister Sergei Lavrov also attended the mourning ceremony in Moscow and laid a bouquet of white lilies by Bagapsh's side.

On Sunday, Medvedev and Prime Minister Vladimir Putin expressed their condolences over the Bagapsh's death.

"Bagapsh was an advocate of friendship and alliance with Russia and arduously worked on deepening close bilateral ties between our countries," Medvedev said in a message addressed to Abkhaz Vice-President Alexander Ankvaba, who is presently acting president of the former Georgian republic.

An official spokesman for the Abkhaz president has said that Bagapsh died of cancer.

Abkhazia and another Georgian breakaway republic, South Ossetia, were recognized by Russia as independent states in 2008 following a five-day war, which started when Georgia attacked South Ossetia in an attempt to bring it back under central control.

Only Nicaragua, Venezuela and the tiny Pacific island of Nauru have followed Russia's suit. Georgia considers the two regions part of its sovereign territory.