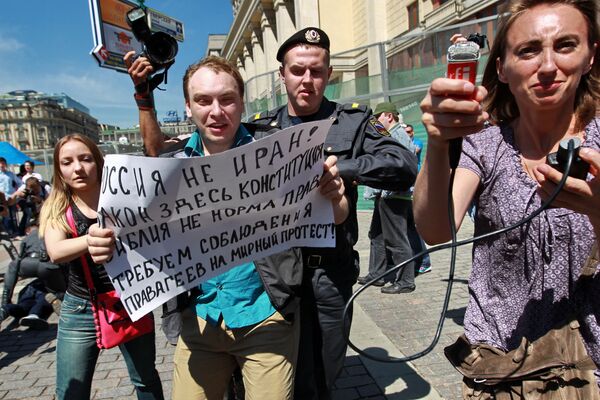 Over 30 gay parade supporters and opponents were arrested on Saturday, the city's police representative said.

Over 30 gay parade supporters and opponents were arrested on Saturday, the city's police representative said.

Police in Moscow said on Friday they would enforce the city's ban on a protest by gay rights campaigners in the Russian capital. Nikolai Alexeyev, Russia's leading gay rights activist and head of the Moscow Gay Pride organization, has said activists would try to hold the city's first gay rights rally on May 28, despite a ban on the event.

"18 activists of the so-called gay movement and 16 opponents of holding a minority's parade were arrested," the spokesman said.

The Moscow police said on Friday they would cut short any "unlawful actions."

The request to hold the rally was rejected earlier this month by the city government, which restated its position on Wednesday. The city received complaints from religious groups, ultra-nationalists and the Moscow City Parent Committee over the application and warned that such a protest could trigger violence.

Former Moscow mayor, Yury Luzkhov, who was in power for 18 years before being dismissed by President Dmitry Medvedev in September last year, famously described gay pride parade as "satanic."

The capital's gay community expressed the hope that a parade would be permitted by new Mayor Sergei Sobyanin, but in February he said gay parades were unacceptable in Moscow.

Last year, the European Court of Human Rights ruled that Russia had violated the rights of gay activists by refusing to allow them to openly protest, and ordered the government to pay a fine and damages amounting to about $40,000.