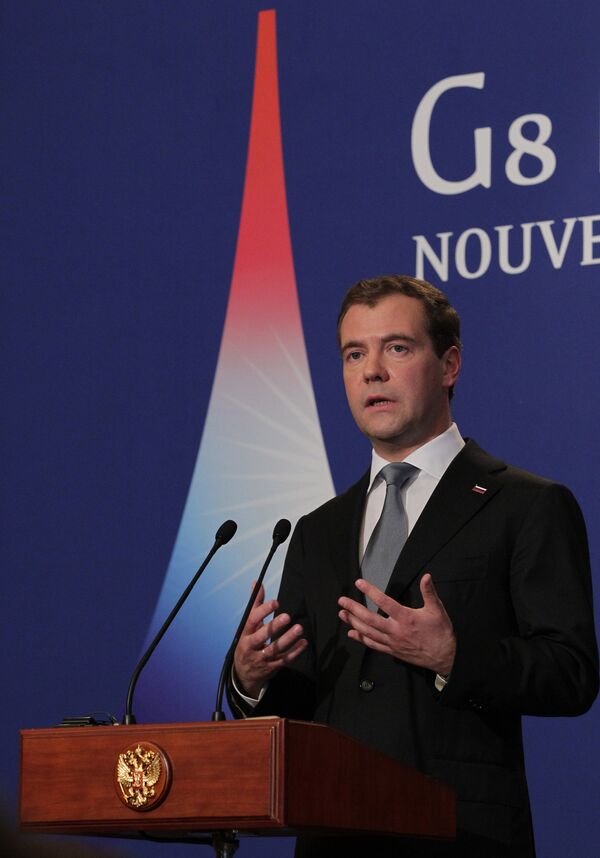 Muammar Gaddafi's regime has lost its legitimacy and the Libyan leader must leave his post, but Moscow will not give him shelter, Russian President Dmitry Medvedev said on Friday.

Muammar Gaddafi's regime has lost its legitimacy and the Libyan leader must leave his post, but Moscow will not give him shelter, Russian President Dmitry Medvedev said on Friday.

"If you saw the [summit's final] declaration, it is written there that the regime of Gaddafi has lost its legitimacy and he must leave," Medvedev said at a press conference after the G8 summit in Deauville.

Asked whether Moscow would be ready to provide asylum to Gaddafi, Medvedev said, "It wouldn't."

Gaddafi should step down before the issue of shelter could be discussed, Medvedev said, indicating that other countries might be willing to offer asylum.

The question came amid media reports that the United States and France have asked Medvedev to make an exile offer to Gaddafi in an effort to persuade him to leave the country.

Medvedev said that Russia wants Libya to remain a free and independent state.

Russia supports U.S. President Barack Obama's position on the need to create a Palestinian state within the 1967 borders, Medvedev said.

"I told my colleague Barack Obama yesterday that I absolutely agree with his position," he said.

"This is the only viable basis for the establishment of a [Palestinian] state," he said, adding

Russia "absolutely" supports US President Barack Obama's assertion that Israel's 1967 borders must be the basis for negotiations on establishment of a Palestinian state, President Dmitry Medvedev said on Friday.

In a landmark speech at the State Department last week, Obama said "the borders of Israel and Palestine should be based on the 1967 lines with mutually agreed swaps, so that secure and recognized borders are established for both states."

"I told my colleague Barack Obama yesterday that I absolutely agree with his position [on the Palestinian state]," Medvedev said at a press conference at the conclusion of the G8 summit in France.

"It is the only basis for the creation of the [Palestinian] state," he said adding that Israel and the Palestinians bore equal responsibility for resolving their long-running conflict.

Direct talks between the Israelis and Palestinians, which resumed last September after a 20-month standoff, collapsed three weeks later when Israel refused to stop construction in the occupied West Bank.

The Palestinians will seek to achieve statehood at a UN vote this September. The State of Palestine has so far been recognized by 112 UN member nations but needs to acquire 135 recognitions, a majority two-thirds of the 192 UN members.

Medvedev said Russia and the United States were "wasting time" on missile defense.

"So far, I'm not satisfied with the way the U.S. and all NATO countries have reacted to my proposals," he said.

Moscow has been concerned by the U.S. reluctance to provide legally binding guarantees that its European missile defense system will not be directed against Russia.

"We must receive the guarantees that it is not directed at us. So far, no such guarantees have been given," Medvedev said.

Medvedev warned last Wednesday that Russia would have to build up its nuclear capability if NATO and the United States failed to reach an agreement with Moscow on European missile defense cooperation.