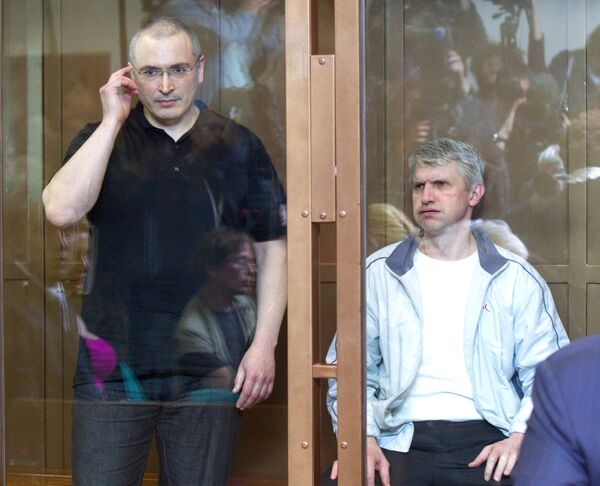 The Moscow City Court upheld on Tuesday a sentence against Russian tycoon Mikhail Khodorkovsky and his partner Platon Lebedev and reduced their 14-year prison terms by one year.

The Moscow City Court upheld on Tuesday a sentence against Russian tycoon Mikhail Khodorkovsky and his partner Platon Lebedev and reduced their 14-year prison terms by one year.

The decision was taken during an appeal hearing against a verdict announced late last year to sentence the former executives of the Yukos oil company to six years in prison for embezzlement and money laundering. The two men were already serving eight year sentences for fraud.

The ruling means that the pair will remain behind bars until well after the March 2012 presidential elections in Russia.

The case is widely viewed as a political vendetta by Russia's powerful prime minister, Vladimir Putin, whom Khodorkovsky challenged by funding liberal opposition parties in the early 2000s.

In a speech to the court on Tuesday, Khodorkovsky said the charges against him and the sentence which had been handed down were "absurd."

Khodorkovsky and Lebedev’s lawyers described the court ruling as a “cosmetic reconstruction” intended to give the initial harsh verdict a semblance of fairness.

Tuesday’s ruling is a “symbolic action” intended to demonstrate that efforts by Russian President Dmitry Medvedev to improve the country’s juridical system are not in vain, Alexei Mukhin, who heads Russia's Center for Political Information, told RIA Novosti.

“Medevedev recently made several statements intended to prove his liberal position, and those statements needed to be backed up with action,” he said. “It appears that the Russian juridical system is trying to provide the president with this.”

The court also upheld a decision to close a criminal case against the two men on allegations of stealing shares in VNK (Eastern Oil Company) as the term of the case has expired. VNK was privatized by Yukos in 1997 in a controversial auction.

Under Russian law, when a case is closed, it means the suspect is neither found guilty nor cleared of the charges. Khodorkovsky and Lebedev wanted the case to be reopened.

Lawyer Vadim Klyuvgant said the defense will appeal the ruling to the Presidium of the Moscow City Court. He also said the lawyers will add new documents to their claims filed to the European Court of Human Rights following the new court decision.

But Khodorkovsky supporters are not optimistic about the fate of the jailed tycoons.

“I understood [after the December verdict] that we cannot expect anything good from our juridical system and that court rulings are being dictated from somewhere else,” said Khodorkovsky Foundation head Irina Yasina. “What happened today is not news to me at all. It is just another attempt to create a semblance of justice.”

In February, a court aide claimed that the judge who passed December’s verdict had received instructions from the Moscow City Court. The judge has described the allegations as slander.

“To make a decision on such a difficult case in one day means not to consider it deeply, but just to take a formal track,” he said.