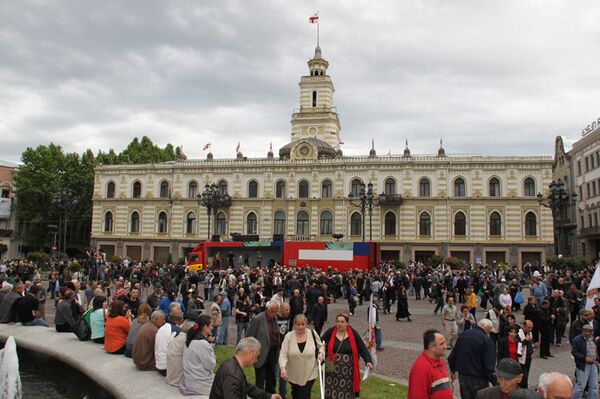 Russia accused Georgia on Monday of violating the right to public assembly by using force against protesters demanding the resignation of President Mikheil Saakashvili.

Georgian police used tear gas, batons and rubber bullets to disperse protest rallies organized by opposition in Tbilisi and Batumi over the weekend. Several people were injured and at least 10 arrested in clashes between protesters and police.

"Such actions by the regime of Mikheil Saakashvili are an attempt to hamper the exercise by the public and political forces in the country of their legal rights to the freedom of assembly and expression of opinions, stipulated, in particular, in the European Convention for Human Rights and Fundamental Freedoms," Konstantin Dolgov, the Russian Foreign Ministry's envoy for human rights, said in a statement.

"If the Georgian authorities continue to use violence, it may lead to further escalation of tensions in relations between the authorities and the opposition and to even greater destabilization of the situation in the country," Dolgov said.

The Georgian authorities say police had to respond to acts of hooliganism by protesters and rallies will be allowed to continue unhindered as long as they remain peaceful.

Saakashvili was elected president in a landslide in 2004 after the Rose Revolution, but his popularity has waned since a series of corruption scandals in 2007 and the disastrous 2008 war with Russia over two breakaway Georgian regions that Moscow now recognizes as independent.

Saakashvili is on a four-day visit to Hungary since May 21. Opposition leaders, including former parliament speaker Nino Burdzhanadze and ex-defense minister Irakly Okruashvili, have pledged to force Saakashvili to step down upon his return.

Russia has often been criticized by international observers for its own record on human rights, including the frequent break-up of opposition protest rallies by police.