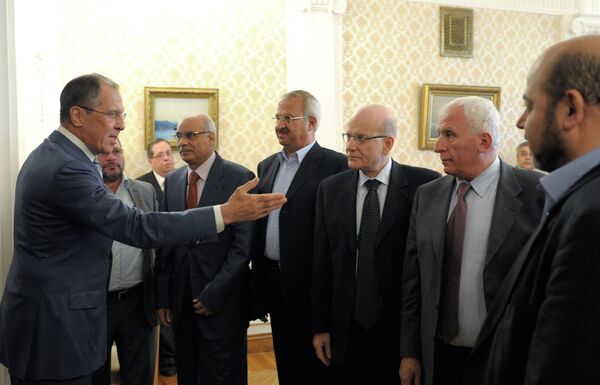 Russia has promised to support the Palestinian bid for statehood at the UN in September, Hamas deputy political bureau chief Moussa Abu Marzouq said on Monday.

"The Russian foreign minister has promised that if in September we submit an application to the UN on the formation of an independent Palestinian state, Russia will back that bid," he said after talks with Foreign Minister Sergei Lavrov.

The Russian Foreign Ministry has yet to comment on the Hamas leader's remarks.

Marzouq also said the name of the new head of the PNA government will be announced in early June.

Representatives of the Palestinian groups Fatah and Hamas on Monday agreed a joint statement with Russia, Lavrov said earlier in the day.

The leaders of Fatah and Hamas, as well as of the People's and Democratic Front for the Liberation of Palestine and the Palestinian People's Party, Al-Shaabare, met with Lavrov in Moscow.

The Palestinians want the borders of their future state to be formed within the borders that existed before the 1967 Arab-Israeli war.

Fatah and Hamas signed a peace deal in Egypt's capital Cairo on May 4 to end their four-year rift.

Israeli Prime Minister Benjamin Netanyahu said the accord was a "tremendous blow to peace and a great victory for terrorism," urging Abbas to choose peace with Israel rather than reconciliation with Hamas.