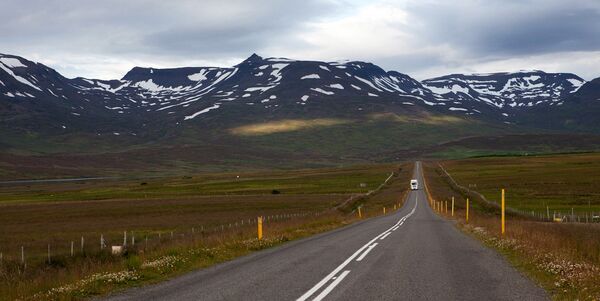 © Photo : Maria Karasova
Subscribe
The Grimsvotn volcano in Iceland's most active Vatnajokull glacier started to erupt in the late hours of Saturday.

The Grimsvotn volcano in Iceland's most active Vatnajokull glacier started to erupt in the late hours of Saturday, an English-language magazine about Iceland said on its web page.

The volcano showed clear signs of "volcanic unrest" at around 22:00 Moscow time (18:00 GMT on Saturday), with Icelandic media quoting geologist Hjorleifur Sveinbjornsson as saying the eruption was imminent. Plumes of ash and smoke were seen rising from the crater an hour later.

Iceland Review, the country's oldest English-language magazine, said on its website that the eruption will not disrupt air travel in the way the eruption of another Icelandic volcano, Eyjafjallajokull, did last year.

"The eruptions have had almost no effect on air travel. Airplanes do of course have to avoid the surrounding area, but the circle has been very limited," the magazine said.

The eruption on the Eyjafjallajokull Glacier in Iceland, which began on April 14, paralyzed air traffic throughout central and northern Europe, leaving thousands of travelers stranded and forcing more than 20 European countries to close their airspace.

"Most of the time the eruptions are followed by floods which sometimes cause damage in roads and bridges," Iceland Review said. "The area affected is sparsely populated and there is no report of any human casualties in recent times."

The volcanic cloud reached the height of 20,000 meters by 21:00 GMT, but has dispersed in the atmosphere by now.

The Vatnajokull area is the most active volcano location in Iceland. Since records began in 1920, it has erupted nine times, the previous eruption recorded in 2004. Most of them lasted at least one week, but the 2004 eruption took only four days.