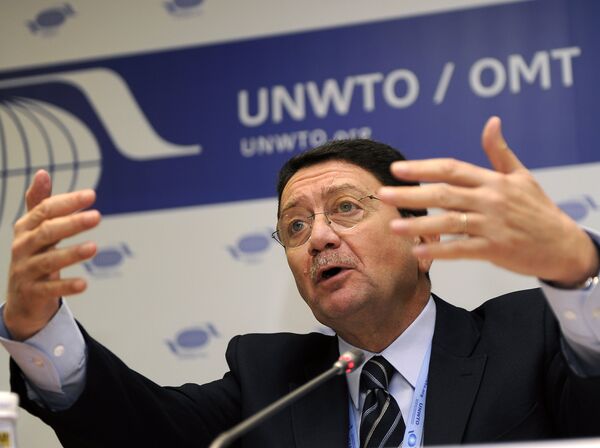 The Russian government should review its strict visa policies and take more efforts to make travelling in Russia easier in order to attract more tourists, the head of the World Tourism Organization (UNWTO) said.

The Russian government should review its strict visa policies and take more efforts to make travelling in Russia easier in order to attract more tourists, the head of the World Tourism Organization (UNWTO) said.

"Every country in the world has ability to adjust its procedures and regulations to encourage more visitors," Taleb Rifai said in an interview with RIA Novosti during the global tourism summit in Las Vegas. "There is need in Russia to make visiting Russia easier."

Russia in the last five to seven years has become a major tourism player in the world, Rafai said.

"Everybody looks at Russia as at very valuable source market," the UNWTO head said. "Over 40 million of Russian travel every year but the more impressive figure is that of inbound into Russia as well. Last year Russian outbound market grew about 26 percent which is very impressive result," he said, adding that the growth was almost as big as in China.

While travelling around the world, he said he can "feel how everybody is interested in Russia now."

In order to make it easier for tourists to come to Russia, the country's government should act on two levels: "one is a level of visas, and the other is a level of airlines," Rafai said, adding that in his opinion, the first issue was more important than the second.

Rafai said he had visited Moscow in mid-March, at the same time with U.S. Vice President Joe Biden. During talks with Biden, Russian Prime Minister Vladimir Putin proposed scrapping visas between Russia and the United States.

"I was very happy to see the statement of Prime Minister Putin when he said: let's not only talk about free trade, let's talk about free visa regime," he said. "This is the attitude we like to see Russia leading in the world."

He also mentioned Turkey as an example of a country that has benefited from its decision to scrap visas for Russians. The number of Russian tourists increased threefold since Turkey announced the decision a couple of years ago, he said.

Rafai also called on Russian airlines to increase the number of flights to Russian cities other than Moscow and St. Petersburg and to lower flight prices.

He suggested that a lack of high-level touristic services and Russia's underdeveloped infrastructure was a problem, but not a major obstacle for travelling in the country.

The Russian government should take more efforts to advertise the country, its touristic opportunities, and especially its food, Rafai said, adding that Russian Borscht was the "best soup" he has ever eaten.