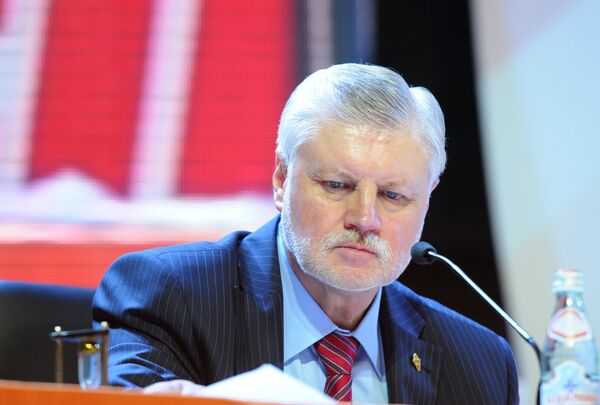 © RIA Novosti . Ruslan Krivobok
/
Go to the photo bank
Subscribe
The St.Petersburg Legislative Assembly has recalled its own member, Federation Council Speaker Sergei Mironov from his seat in the upper house of parliament.

The St. Petersburg Legislative Assembly has recalled its own member, Federation Council Speaker Sergei Mironov from his seat in the upper house of parliament.

Forty three members of the St. Petersburg Legislative Assembly voted for Mironov’s recall, five were against. Twenty-six votes were needed to unseat Mironov.

Mironov, who held the Parliamentary Speaker post for 10 years, said he plans to continue his political career as a lawmaker in the lower house of the Russian parliament, the State Duma.

“I will assume the mandate of State Duma lawmaker - I have a legal right to do so - and in the near future I will speak from the State Duma podium,” Mironov said.

Mironov quit as chairman of Just Russia, a pro-Kremlin party, in mid-April, but remained its unofficial leader.

He said on Wednesday that he would lead his party in parliamentary elections in December.

“If somebody assumed that I am leaving the [Just Russia] party - they are wrong - it is a simple reshuffling of forces ahead of the decisive battle that we are facing in December,” Mironov said.

Russian President Dmitry Medvedev said on Wednesday that Mironov’s departure is a reflection of political life in Russia, and would benefit both the ruling United Russia and Just Russia.

Meanwhile, United Russia is already maneuvering to install one of its members as Federation Council speaker.

Members of the United Russia faction in the Federation Council are planning to consult with Prime Minister Vladimir Putin, who is the leader of the party, to put forward a United Russia candidacy for the post.

“I am sure that a representative of our party [United Russia] will head the Federation Council,” First Deputy State Duma Speaker Oleg Morozov said, adding that the discussion of the candidacy would be held in May.