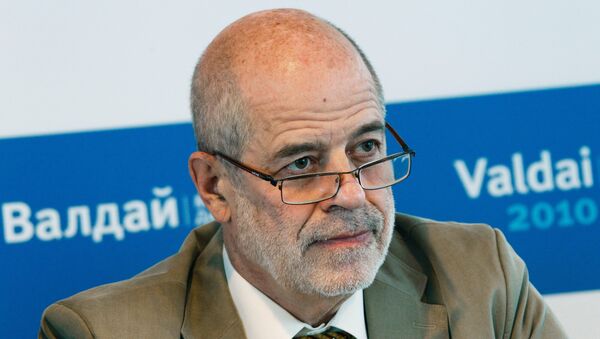 Representatives of the Tripoli government may ask Moscow to mediate the ongoing conflict in Libya at Tuesday's meeting with Russian Foreign Minister Sergei Lavrov, an expert said.

"I think mediation [request] should not be ruled out. One thing I can say for sure is that any military aid [to Libya] is impossible," said Vitaly Naumkin, a leading Russian expert on the Middle East.

"It's evident that the meeting will be held on Tripoli's initiative. Taking into account Russia's criticism of the western coalition and its operation in Libya, it's quite obvious that Tripoli today seeks Moscow help," the scientist added.

The meeting is likely to focus on preconditions for a ceasefire and negotiations between the government in Tripoli and rebel authorities in Benghazi.

Lavrov met with UN Secretary General's special envoy to Libya, Abdul-Ilah al-Khatib, late on Monday, but his meeting with representatives of the rebel Benghazi government has been delayed "for technical reasons."

The revolt in Libya against Gaddafi's forty-year rule, which began in mid-February, has already claimed thousands of lives, with Gaddafi's troops maintaining their combat capabilities despite NATO airstrikes against them.

Despite allied efforts under UN mandate, fighting between the rebels and Gaddafi loyalists has come to a standstill on several fronts.