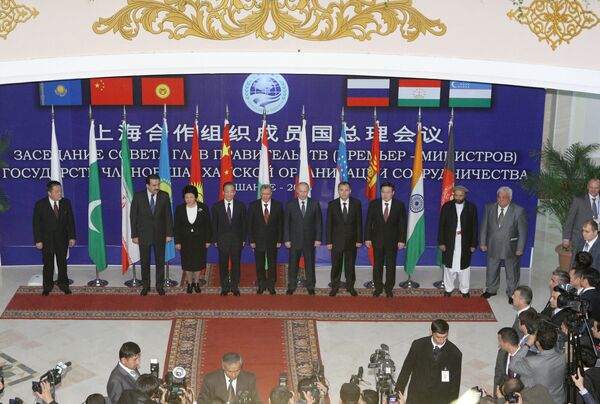 The documents approved at the Shanghai Cooperation Organization's foreign ministers' meeting in Almaty, Kazakhstan, on Saturday all highlight Afghanistan.

The documents approved at the Shanghai Cooperation Organization's foreign ministers' meeting in Almaty, Kazakhstan, on Saturday all highlight Afghanistan. The regional organization believes its development will heavily depend on that country, where a drawdown of U.S. and NATO troops is in the offing.

Their leaving will change the region, but it will not necessarily become safer or more understandable.

The SCO is a powerful political organization that works year-round at many levels, from high-powered summits to student meetings. It is a classic regional organization similar to ASEAN in Southeast Asia or Mercosur in Latin America, with meetings bringing together heads of state and government, ministers of defense, ministers of culture, heads of antinarcotics agencies and even bankers. It also has programs aimed at creating a common security and cooperation space in Central Asia.

The SCO member-states - Russia, China, Kazakhstan, Kyrgyzstan, Tajikistan and Uzbekistan - are all regional or neighboring countries.

The SCO Council of Foreign Ministers usually meets shortly before the organization's summits. This year it met to approve the scenario for the SCO summit which will be held in Astana, Kazakhstan's new capital, on June 15. Such meetings usually discuss the organization's plans for the coming year rather than the final documents.

During their meeting in Almaty, the ministers agreed on a number of documents (http://www.kazinform.kz/rus/article/2380037), including a draft of the Astana declaration and an antinarcotics strategy. Russian Foreign Minister Sergei Lavrov said: "The other day Afghanistan requested observer status. We will discuss its request at the upcoming summit meeting." (http://www.rian.ru/world/20110514/374450073.html)

Whether or not to grant member or observer status to countries in the region is one of the key issues facing the SCO, because the future of both the region and the organization depends on the decisions made.

India, Pakistan, Iran and Mongolia all hold observer status at the SCO, which has so far kept Afghanistan at arm's length, although President Hamid Karzai attends its summits as a guest.

Events in and around Afghanistan actually led to the establishment of the SCO in 2001, after a number of meetings between the leaders of the countries located along the former Soviet-Chinese border.

Their goal was to make the border safer and relations in the region more predictable. By summer 2001, they all faced a common threat: the Taliban regime in Afghanistan. This helped cement their relations and led to the SCO's formation.

Many years prior to that, in 1967, Southeast Asian nations created ASEAN to ward off the Communist threat coming from China and its "cultural revolution."

In the summer of 2001, Taliban preachers freely crossed the border into Uzbekistan and Tajikistan where subversive organizations were created and the threat of terrorists seizing power in each of the two countries became palpable. Three months after the SCO was founded, the United States was hit by the worst terrorist attack in its history. The situation across the region changed radically after Washington decided to send troops into Afghanistan to fight the terrorist threat.

I witnessed the historic meeting of SCO foreign ministers in Beijing in January 2002, when they discussed whether the organization would be effective in this new changed reality. They agreed that it would be even more instrumental than ever before, because its mission was to save Central Asian states from the fate that befell Laos and Cambodia during the Vietnam War. Without it, the Central Asian states were at risk of being carved up by the Untied States and the other global powers, which would topple their regimes and set up military bases wherever they liked without as much as asking the sovereign states for permission.

The United States and other countries that fought in Vietnam were offered an opportunity to cooperate with this group of countries, united by a common understanding of their interests in the region. America's reaction to that offer is another matter, and is no longer relevant.

But that era is now drawing to a close. The Untied States and NATO will eventually pull out of Afghanistan and scale down operations in Pakistan. The process may be long or short, but one way or another it will end. When that happens, Afghanistan will become the scene of competition or coexistence of the interests of China, India, Pakistan, and possibly Russia, Uzbekistan and other SCO member-states and observer countries. They must prepare for this change of scene.

It was rumored ahead of the SCO foreign ministers' meeting in Almaty that the ministers and the upcoming summit in Astana would prioritize the admission of new members, although the summit will most likely only approve the paperwork applicants will have to submit.

Admitting new members would be appropriate given the changed reality. Iran, which has long coveted SCO membership, will not be a problem. If its policy gradually becomes more civilized and transparent and the issue of the UN sanctions to force Iran to abandon its nuclear programs is resolved, Iran will be admitted to the SCO, because it is a partner to many countries in the region.

But if that happens, it would also be logical to admit India and Pakistan, although China is against granting India membership. Otherwise Afghanistan risks becoming caught up in a tug-of-war between at least two regional powers.

Afghanistan will most likely be granted observer status and then further down the line full membership of the SCO, if only because the SCO's antinarcotics strategy can not succeed unless Afghanistan is incorporated.