Russia should be run by politicians, not fat cats - Medvedev 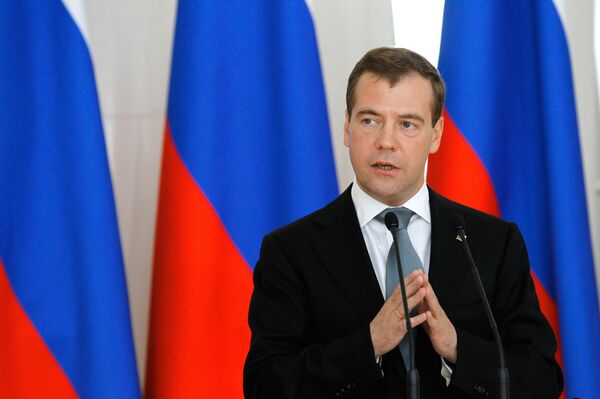 Russian President Dmitry Medvedev continued to flex his muscles ahead of the 2012 presidential elections on Friday by openly criticizing corruption at the highest levels of Russian politics.

Russian President Dmitry Medvedev continued to flex his muscles ahead of the 2012 presidential elections on Friday by openly criticizing corruption at the highest levels of Russian politics.

A string of assertive statements from Medvedev, usually considered the underdog to Prime Minister Vladimir Putin, have led to fears of a power struggle ahead of the forthcoming elections.

"The merger of power and business, which existed not long ago at the highest levels still remains, although it has become less widespread." Medvedev told junior party members in the central Russian town of Kostroma on Friday. Now in the Duma we have people who represent parties, not fat cats."

In March, Medvedev ordered Putin's deputies and cabinet ministers to leave the boards of state firms to increase transparency. The move caused the resignation of close Putin ally Igor Sechin, known as Russia's energy tsar, from the board of Rosneft.

Putin and Medvedev have said that they will decide in the near future which of them will run for the next presidential term. Putin, who ran two terms from 2000-2008, has made signs that he wants to return to the top spot.

Medvedev on Friday also stressed the need for regular turnover of state and government officials at all levels.

"If a person believes that he is self-sufficient and can remain in his position of authority forever, this person is dangerous to society," Medvedev said.