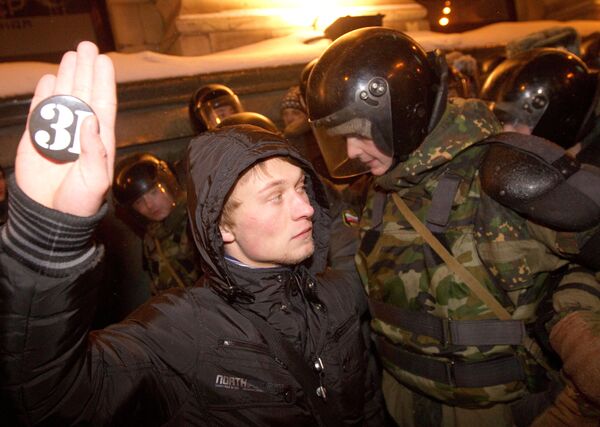 Amnesty International has sharply criticized the Russian authorities for continuing violation of human rights and freedoms in the country.

Amnesty International has sharply criticized the Russian authorities for continuing violation of human rights and freedoms in the country.

"Freedom of assembly and expression continued to come under attack, including through the banning of demonstrations, their violent dispersal and the prosecution of individuals under anti-extremism legislation," the London-based human rights watchdog said in its annual report published on Friday.

The organization cited clampdown on several peaceful demonstrations by opposition in Moscow and St. Petersburg, scandals around a highway through Khimki forest near Moscow and gay parades.

Amnesty International, which celebrates its 50th anniversary this year, specifically blamed the inefficient and corrupted justice system in Russia for failure to improve the human rights record.

"Judicial reform continued to be presented as a government priority. However, reforms remained piecemeal and had only a limited impact on the underlying structural deficiencies," the 2011 report said.

According to the human rights watchdog, "corruption and collusion between the police, investigators and prosecutors were widely perceived as undermining the effectiveness of investigations and obstructing prosecutions."

The report noted the rise of racially motivated violence in the country, citing data from the SOVA Center for Information and Analysis, which indicated 37 people died as a result of hate crimes in Russia last year.

The organization also expressed concern over a volatile situation in Russia's North Caucasus, where violence continued to spread beyond Chechnya to the neighboring regions of Dagestan, Ingushetia, Kabardino-Balkaria and North Ossetia.