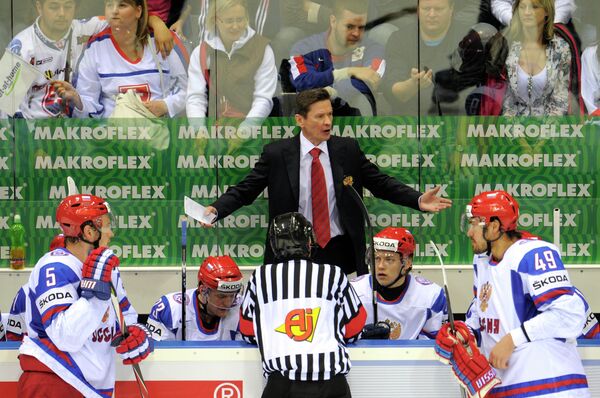 Russia defeated Canada 2-1 in a quarterfinals game at the Ice Hockey World Championships in Slovakia on Thursday.

Russia defeated Canada 2-1 in a quarterfinals game at the Ice Hockey World Championships in Slovakia on Thursday.

Both teams exercised caution and searched for weak spots in defense during the scoreless first period. Canada dominated in faceoff wins and shots on goal.

The game opened up in the beginning of the second period, and the Canadians quickly punished the Russian side with a breakaway goal by Jason Spezza. Russia had a great opportunity to respond in the middle of the period when John Tavares received a four-minute high-sticking penalty, but failed to beat Canadian goalie Jonathan Bernier.

Russian hopes for a comeback were spoiled in the beginning of the third period when a puck hit the cross bar and a post after a snapshot by a Russian defender. A video review showed the puck did not cross the goal line.

However, Russia managed to even the score in mid-period on an individual effort by Alexei Kaigorodov, who outplayed three Canadian players and beat Bernier on a breakaway.

Energized by the goal, the Russian team swarmed the Canadian zone and took the lead after a goal by Ilya Kovalchuk.

The Canadians switched the goalie for the sixth player on the last minute, but failed to score the equalizer.

Russia will play in semis on Friday against Finland, which beat Norway 4-1 earlier on Thursday.

In another semifinals matchup, the Czech Republic will face Sweden.