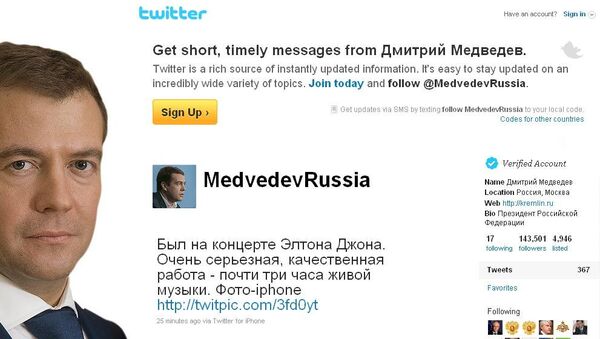 © Photo : http://twitter.com/
Subscribe
Russian President Dmitry Medvedev said on Thursday he does not mind that some people post abusive comments to his Twitter micro blog, saying some users need time to grow up.

Russian President Dmitry Medvedev said on Thursday he does not mind that some people post abusive comments to his Twitter micro blog, saying some users need time to grow up.

"The fact is that Twitter is set up so that no one is banned. It was created in such a way that any person can tell anyone what he thinks about anything using the juiciest expressions. If you want, Russian President Dmitry Medvedev, and if you want, you can say exactly the same to [U.S. President Barack] Obama," the president said, answering journalists' questions about his attitude towards obscenities in Twitter.

He said that using rude words in Internet is a matter of culture. "I guess it [Twitter] was not created for this, but if someone wants to express his emotions, I do not mind."

The president said he is opposed to repressive measures against his micro blog's readers since they should grow up on their own.

Medvedev, who styles himself as a technologically savvy leader, officially registered his Twitter account in June 2010 during a visit to Silicon Valley. More than 270,000 people are currently following him at MedvedevRussia on the micro-blogging site, while the English version, MedvedevRussiaE, has almost 100,000 followers.

In his Twitter blog, the president shares his views of events in Russia and abroad, posts photographs that he takes, and responds to questions asked by other Twitter users.

Medvedev's Twitter and LiveJournal accounts have been named the best blogs in the Russian-language Internet in 2011.