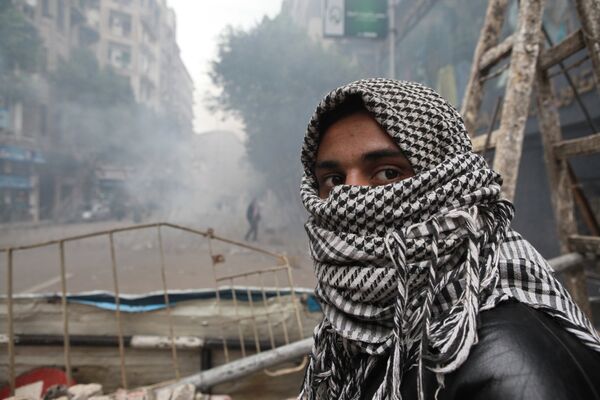 © RIA Novosti . Andrey Stenin
/
Go to the photo bank
Subscribe
The Schengen area, which guarantees free movement across and between 22 European Union members and 3 non-EU countries, has encountered unexpected difficulties in the wake of the protests that have swept the Middle East and North Africa, and gained the moniker Arab Spring.

The Schengen area, which guarantees free movement across and between 22 European Union members and 3 non-EU countries, has encountered unexpected difficulties in the wake of the protests that have swept the Middle East and North Africa, and gained the moniker Arab Spring.

France created a precedent when more than 25,000 Tunisians, who had fled to Italy to escape the "democratic revolution" that Europe welcomed so cheerfully, decided to cross into France. Since they are illegal immigrants without money or documents necessary to reside in the EU, this left the Italian government with something of a conundrum. Granting them refugee status involves committing to provide them with some form of support, however basic, whereas deporting them to their home country would be inhumane.

Eventually, the Italian government found a solution: it issued them with temporary residence permits which allow the holders to move freely around the EU (excluding Bulgaria, Romania and Cyprus), as well as through Schengen member states such as Iceland, Norway, Switzerland and Liechtenstein.

Since Tunisia is a former French colony and most Tunisians speak French, they logically decided to cross into France.

However, the French authorities intercepted them on trains and sent them back to Italy, outraging the Italians. This created a trilateral conflict, with France and Italy trading accusations and also complaining to the European Commission in Brussels.

Twenty-five thousand immigrants is a drop in the ocean for Europe, which has a combined population of 400 million people. Furthermore, European leaders were lightning-fast to praise the Arab Spring, the very event that these Tunisians are fleeing.

"It is unacceptable that the arrival of a few tens of thousands of immigrants at the borders of countries which are among the largest in Europe and are founder members of European integration should serve as an excuse to question Schengen, the free movement of people and our common policy of freedom, security and justice. It is also unacceptable that this is so obviously happening as a result of highly populist anti-European pressures. All this sends a discouraging message, one which is deeply negative and contrary to the Europe that we need," said Juan Fernando Lopez Aguilar, chairman of the EU Committee on Civil Liberties, Justice and Home Affairs.

But French President Nicolas Sarkozy and Italian Prime Minister Silvio Berlusconi have sent a discouraging message, thereby showing once again that modern Europe is not prepared to back up its rhetoric with either action or funds.

As if to confirm this, the European Commission has now taken France's side in its quarrel with Italy, saying that under Article 25 of the Schengen Borders Code each member state "may exceptionally and immediately reintroduce border control at internal borders ... when there is a serious threat to public policy or internal security."

It looks like the European Commission has yielded to Sarkozy's pressure. He was acting from a purely populist standpoint. Back as France's Interior Minister, he forged his political career in his fight against illegal immigration.

In Italy, Umberto Bossi, who leads the Northern League party which calls for autonomy or independence for Northern Italy and is one of Berlusconi's allies in the ruling coalition, said that Italy has become a French colony.

Bossi made his career by demanding the deportation of immigrants from Italy, in particular from its industrialized northern regions.

All this amounts to a serious potential for conflict that weighs heavily on Schengen countries ahead of June's EU Council meeting, where they are to consider admitting Romania and Bulgaria into the Schengen area.

France and Britain have long insisted that Romania must tighten control over its border with Moldova, while Sarkozy deported Roma Gypsies to Romania.

If Romania and Bulgaria are admitted to the Schengen zone, the decision is likely to be accompanied by numerous amendments to the Schengen Agreement that would seriously undermine the idea of the freedom of movement.

At the same time, the idea of reuniting Romania and Moldova, which is so popular in Bucharest, may well be denounced as a nationalist utopia.