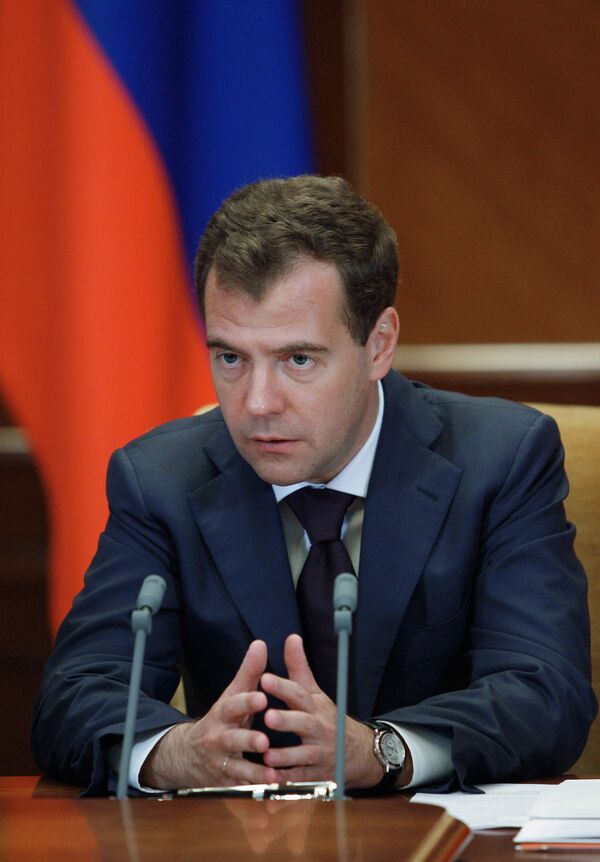 © RIA Novosti . Vladimir Rodionov
/
Go to the mediabank
Subscribe
International
India
Africa
Competition is vital for the country's political stability and no one party can claim a dominant role, President Dmitry Medvedev said on Thursday.

Competition is vital for the country's political stability and no one party can claim a dominant role, President Dmitry Medvedev said on Thursday.

In an unexpected twist indicative of a possible rift with Prime Minister Vladimir Putin, Medvedev suggested that the ruling United Russia party's victory in the upcoming parliamentary election was not a foregone conclusion.

"If everyone decides that things will follow a definitive scenario, then our political system does not have a future," Medvedev said, adding that "all the electoral battles still lie ahead."

He stressed that political competition was vital, saying that "only then will our political system will be stable."

"No one political force can regard itself as a dominant one, but any force should strive for maximum success," he said.

Responding to a reporter's question about Putin's "people's front" project, Medvedev said that it "is within the bounds of our electoral law."

Putin called for the creation of the All-Russia People's Front at a conference of United Russia on Friday to broaden the party's electoral base with "non-party people," including trade unions, NGOs, business associations and youth groups. He followed that up on Saturday by meeting with business, labor and civic leaders at his official Novo-Ogaryovo residence.

Putin said earlier on Thursday that Medvedev backed the idea of a people's front.

"He supports what we are doing," Putin told a meeting with "front" activists.

However, Medvedev fell short of embracing the project, only saying, "as president I believe that this is normal electoral technology."

United Russia has been touting "Putin's initiative" as an inclusive, countrywide project for all political parties under its umbrella.