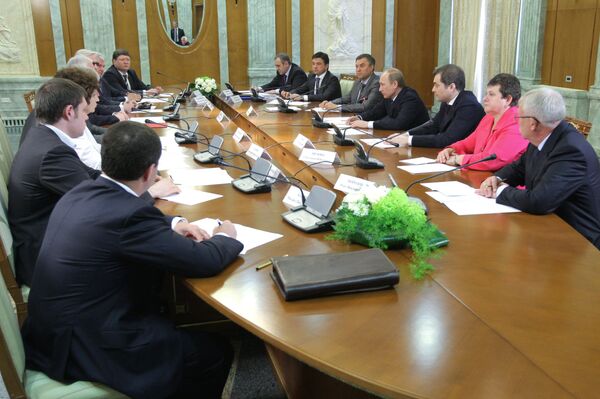 "He supports what we are doing," Putin told a meeting with "front" activists.

Medvedev was not in attendance and has yet to make a public comment.

Putin called for the creation of the All-Russia People's Front at a conference of the ruling United Russia party on Friday to broaden the party's electoral base with "non-party people," including trade unions, NGOs, business associations and youth groups. He followed that up on Saturday by meeting with business, labor and civic leaders at his official Novo-Ogaryovo residence.

Putin said a draft declaration on the formation of the people's front is ready and will be submitted for discussion.

"I suggest that we continue our consultations... and discuss a draft declaration on the formation of the All-Russia People's Front," he said.

On Wednesday, Putin had an informal meeting with members of a coordinating council and leadership of the ruling United Russia party, which discussed his new political initiative, as well as preparations for the December parliamentary elections.

Putin invited all those present to make proposals on the draft declaration.

"I know that all participants in the meeting have studied this document," he said. "Let us exchange opinions and submit the draft declaration for discussion to the organizations [concerned]."

"It is a broad public coalition," Gryzlov said.

The prime minister's spokesman said Putin's idea has been generating considerable attention with "a flow of applications to join such an association" coming in to United Russia, the government press service, and Putin's website.

At the meeting on Saturday, Putin said United Russia needs "an inflow of new ideas, new proposals, and new faces" ahead of the December elections to the State Duma, parliament's lower house.