Putin thanks trade union for backing his 'people's front' plan 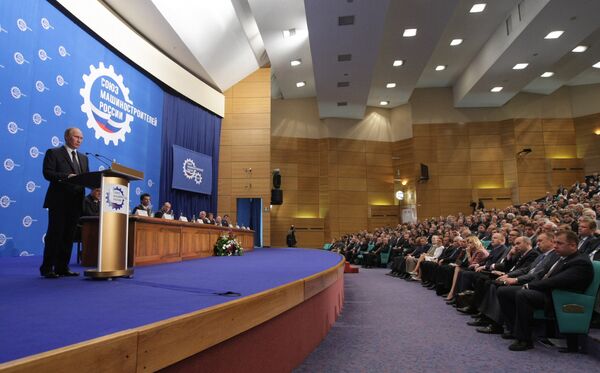 Russian Prime Minister Vladimir Putin on Wednesday thanked the Machine Manufacturers Trade Union for supporting his "people's front" idea and said he hoped his new political project would be a success.

"I hope that this structure will help tap new ideas and promote new people to positions of authority, not least during the State Duma elections in December," Putin said.

Putin called for the creation of the All-Russia People's Front at a conference of the ruling United Russia party on Friday to broaden the party's electoral base with "non-party people," including trade unions, NGOs, business associations and youth groups. He followed that up on Saturday by meeting with business, labor and civic leaders at his official Novo-Ogaryovo residence.

Press secretary Dmitry Peskov said Putin would meet with "front" activists on Wednesday and Thursday, adding that the Wednesday meeting will be an "informal affair" and it will continue on Thursday "with a certain agenda."

The prime minister's spokesman said Putin's idea has been generating considerable attention with "a flow of applications to join such an association" coming in to United Russia, the government press service, and Putin's website.

At the meeting on Saturday, Putin said United Russia needs "an inflow of new ideas, new proposals, and new faces" ahead of the December elections to the State Duma, parliament's lower house.