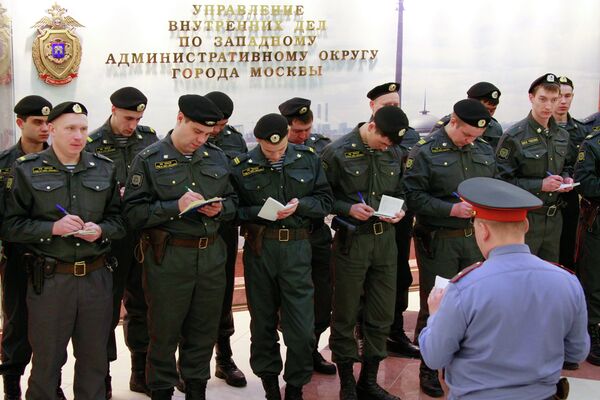 © RIA Novosti . Anton Denisov
/
Go to the mediabank
Subscribe
International
India
Africa
More than 200,000 police officers and over 13,000 servicemen will be involved in maintaining security during nationwide Victory Day celebrations in Russia.

More than 200,000 police officers and over 13,000 servicemen will be involved in maintaining security during nationwide Victory Day celebrations in Russia.

Victory Day that Russia celebrates on May 9 marks the final defeat of Nazi Germany by the Soviet Union in World War II. This year, almost 14 million people are expected to attend festive events, including over 100 military parades, in more than 5,300 Russian cities and towns.

"We plan to involve more than 200,000 police and over 13,000 servicemen in maintaining order and public security during the festivities," first deputy interior minister Mikhail Sukhodolsky said, adding that they would be supported by 12,000 civilian volunteers and almost 5,500 Cossacks.

More than 20,000 police officers, including mounted police and helicopter crews, were summoned to maintain security during the Victory Parade on Red Square and more than 200 other festive events in the Russian capital, according to the Moscow police. All visitors will have to undergo security screening by metal detectors.

Almost 6,000 servicemen will be deployed in cities around Moscow, where some 70 large-scale public events are to take place.

The Victory Parade on Red Square, to be held on Monday morning, is seen as a key episode of the Victory Day celebrations in Russia.

The event will culminate in a flyover by a group of Mi-8 multirole helicopters carrying Russian state and military flags. The Moscow authorities have allocated about 102 million rubles ($3.7 mln) on preparations for the Victory Day parade.