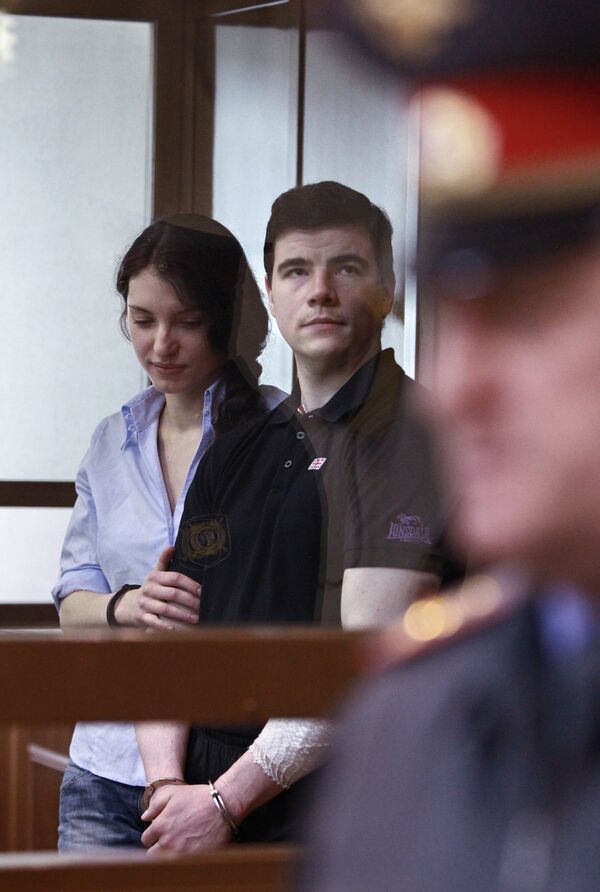 A Moscow court sentenced ultranationalist Nikita Tikhonov to life in jail on Friday for the murder of human-rights lawyer Stanislav Markelov and journalist Anastasia Baburova in 2009.

Markelov and Baburova, who worked for the liberal Novaya Gazeta newspaper, were gunned down in broad daylight in downtown Moscow in January 2009. Investigators said Baburova was killed as a witness to the murder of Markelov, who was an active member of an anti-fascist movement.

A jury found Tikhonov and Khasis guilty of the murders on April 28. Both are linked to the outlawed ultranationalist group, Russky Obraz.

During the hearings, Khasis pleaded not guilty while Tikhonov admitted to a separate arms trading charge but denied involvement in the murder.

Tikhonov and Khasis embraced while the verdict was being announced, apparently oblivious to the judge's words. When the judge asked whether the sentence was clear, Tikhonov answered, "It's been clear since March."

The defendants' lawyers said they would appeal the ruling.

A handful of supporters and friends of the defendants, present at the hearing, smiled when the verdict was announced.

"In five years they will get out, and someone will be dead," one said.

“The sentence is severe but I think they deserve it because this murder was not committed in extreme emotional disturbance,” said Ludmila Alekseyeva, head of the Russian human rights watch the Moscow Helsinki Group.

“This is a premeditated murder, a politically charged murder,” she added.

Lev Ponomaryov, leader of the For Human Rights movement, said in turn that the sentence was predictable because the guilt of Tikhonov and Khasis had been proven.

“It was an expected verdict, and I had expected a life sentence for Tikhonov and about 20 years for Khasis,” he said. “I am not an evil person but I am sure the verdict is fair.”