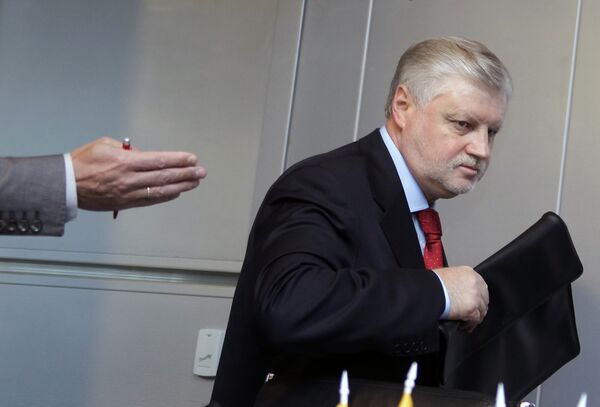 © RIA Novosti . Ruslan Krivobok
/
Go to the photo bank
Subscribe
Sergei Mironov, the speaker of the upper house of the Russian parliament, is facing a recall procedure and may lose his job later this month.

Sergei Mironov, the speaker of the upper house of the Russian parliament, is facing a recall procedure and may lose his job later this month.

Mironov, who was elected by the St. Petersburg legislative assembly, controlled by the ruling United Russia party, has come under attack over his recent calls for the resignation of St. Petersburg Governor Valentina Matviyenko.

The city legislature said it will review the matter at its meeting on May 18.

Mironov admitted that the legislature "has every right to recall me from the Federation Council," but said he would like to know what the formal grounds for his recall were.

Mironov acknowledged on Tuesday that "the law provides for my recall without any reason being given."

"The reasons are obvious," he said. "These are my political views."

United Russia said Mironov had done practically nothing for his home town during the 10 years he had been the speaker, only criticizing it unfairly.

In his May Day public remarks, Mironov described St. Petersburg as one of the most corrupt cities in Russia.

“We will definitely vote for Mironov’s recall,” he said.

United Russia has 23 of 50 seats in the St. Petersburg legislature and the LDPR has five. A Just Russia has 13 and the Communist Party nine.

In mid-April Mironov quit as chairman of A Just Russia, a pro-Kremlin party, but suggested he would remain its unofficial leader and lead its list in December's Duma elections.