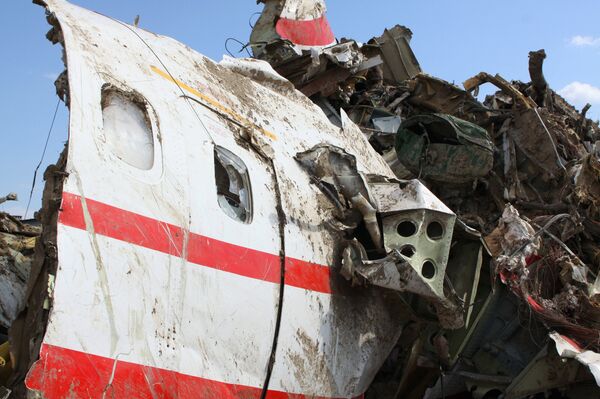 The crash of the Polish presidential jet last year in western Russia has generated another wave of conspiracy theories in Poland, adding to the list of accusations against Russian authorities.

The crash of the Polish presidential jet last year in western Russia has generated another wave of conspiracy theories in Poland, adding to the list of accusations against Russian authorities.

The accident occurred near the city of Smolensk in April 2010, killing everyone on board, including President Lech Kaczynski and other members of the country's political elite.

Initially, the Poles claimed the Tu-154M plane had crashed while landing as a result of alleged Russian interference with its navigation systems and poor runway visibility caused by an artificial fog.

Now defense lawyer Rafal Rogalski, representing a number of the victims' families in court, has suggested that the crash was caused by helium deliberately spread over the Smolensk airfield to reduce the Polish jet's lifting force.

According to Rogalski, the idea behind this was to "cut the wings" of Kaczynski and other high-ranking Polish officials en route to a memorial ceremony for fellow countrymen executed by Stalin's secret police at Katyn during WWII - an event that has long been a point of controversy in Russian-Polish relations.

The lawyer claims that the post-crash autopsies revealed the presence of helium molecules in the victims' bodies. But how could the gas, dispersed in the air, have found its way into the pressurized cabin of the plane? Mr. Rogalski explains that the helium exposure occurred after the crash.

The Polish for helium is "hel." Gazeta Wyborcza, skeptical about all the conspiracy theories floating over the Smolensk plane crash, suggested that Mr. Rogalski "go to hel."

No one in Poland doubts, however, that the new theory will make Mr. Rogalski a television star and bring him onto the front pages of the nationalistic Gazeta Polska. Such are the rules of the game in the modern media age: The most absurd theories usually prove to be the most popular as they draw on the public's prejudices, fears and anticipations.

We now know that Mr. Rogalski built his theory on ideas expressed by a member of the Kaczynski brothers' Law and Justice party. The Polish MP, for his part, was inspired by an anonymous e-mail. But why should it matter to the Polish public?

Nor do they really care about the fact that, according to physicists, for such a sinister plot to materialize, its masterminds would have had to bring in a hundred thousand helium tanks and open them up all at once shortly before the Polish plane's arrival, then stashing the empty tanks.

According to Professor Maciej Sawicki, of the Polish Academy of Sciences' Institute of Physics, the plot would have also required the creation of a special aerodynamic corridor for the presidential jet.

Clearly, the Rogalski theory has little scientific basis from the point of view of physicists. From a psychological standpoint, by contrast, it is a rather interesting experiment, showing the volatility of real-life marketplaces and of online gathering places created through social networks.

World history offers many examples of violent disturbances breaking out precisely in marketplaces - traditionally a center of social life for many communities. Mobs gathering in marketplaces may all too easily take any absurd rumor as an undisputed truth.

The next step is challenging the other stereotypes modern-day Poland holds about Russia. These stereotypes include Moscow's alleged designs to bring Ukraine and Belarus back into the fold, Russia's deep-rooted animosity toward the Poles, and the absolute integrity of Russia's liberal opposition, to name just a few.

In this way, the helium conspiracy theory may become an unscientific impetus for scientific research. Just as alchemy once gave rise to chemistry.