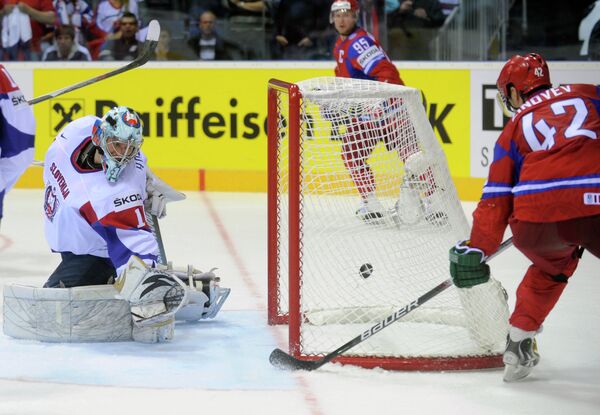 Russia's Vitali Atyushov scored the first goal on the fifth minute of the match, followed by Maxim Afinogenov on the 36th, Dmitri Kulikov and Yevgeni Artyukhin on the 47th, Alexander Radulov on the 57th and Sergei Zinoviev on the 60th.

The Russian fans were disappointed by Slovenia's Andrej Hebar scoring on the 30th minute, Bostjan Golicic on the 43rd and 48th, and Rok Pajic on the 52nd.

In its first match on Friday, Russia lost 2-0 to Germany, for the first time in the event's history. The defeat was also Russia's first loss in the preliminary group stages of the tournament since 2004, when they lost to Sweden.

After the match, Russian head coach Vyacheslav Bykov told journalists "we've had a slap in the face, and now it's time to wake up."

Russia won the championships in 2008 and 2009, but lost in the final to the Czech Republic last year.

Russia will face the championship's host country Slovakia in its last match in the preliminary round on May 3.