May Day marches in Moscow took place without incidents - police 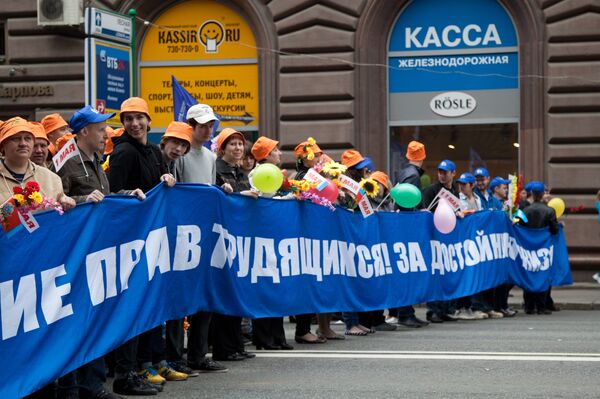 No major incidents were registered in Moscow during demonstrations marking the Labor Day, a local police spokesman said.

No major incidents were registered in Moscow during demonstrations marking the Labor Day, a local police spokesman said.

In Soviet times May 1 was celebrated in Russia as International Workers' Day and saw massive Communist Party rallies. In 1992, the name was changed to Spring and Labor Day but it still remains a national holiday.

Moscow's largest May Day demonstration was organized by supporters of the pro-Kremlin United Russia party, which saw some 25,000 people marching from the Belorussky Rail Terminal in northwestern Moscow to the Mayor's Office on downtown Tverskaya Street.

A demonstration organized by the Russian Communist Party involved about 4,500 people, who gathered near the Bolshoi Theatre on downtown Teatralnaya Square.

About 3,000 people attended a meeting organized by the pro-Kremlin party A Just Russia, and some 700 people joined a demonstration of Russia's Liberal Democrats.

About 250 people were reported to have attended a central Moscow meeting organized by the Russian opposition.

Several people have been detained during the demonstrations, mostly for "prophylactic conversations," the police spokesman said.

A total of 7,000 police officers were involved in assuring security in Moscow during May Day events, he added.

More than 2 million people were expected to attend holiday events across the country.