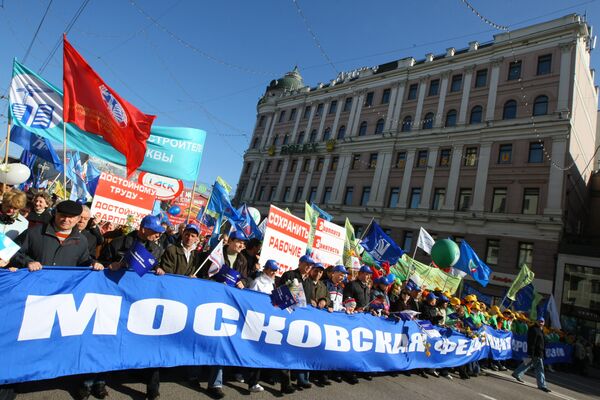 © RIA Novosti . Ruslan Krivobok
/
Go to the mediabank
Subscribe
International
India
Africa
Russia celebrates a national holiday, Spring and Labor Day, on May 1, with trade unions and political parties set to hold rallies across the country.

Russia celebrates a national holiday, Spring and Labor Day, on May 1, with trade unions and political parties set to hold rallies across the country.

In Soviet times May 1 was celebrated in Russia as International Workers' Day and saw massive Communist Party rallies. In 1992, the name was changed to Spring and Labor Day but it still remains a national holiday.

More than 2 million people are expected to take part in holiday events across the country, including demonstrations by the ruling United Russia party, the Communists and trade unions, the ultranationalist LDPR Party and the opposition Solidarity movement.

The Communists will hold rallies all across the country, with the central event scheduled to take place in downtown Moscow. The Communists are expected to hold their rallies under the slogans "Workers Unite in the Struggle for Your Rights," "Workers' Control at Production," "Nationalization of Strategic Sectors" and "The Oligarchs' Property Must Serve the People's Interests."

The Liberal Democrats will focus on the fight against corruption during their rallies across Russia on May 1.

"Corruption in our country has acquired dangerous proportions. Today Russia faces the choice of either remaining a world supplier of raw materials for ever with the dying poor Russian population or making serious transformations in the country's political, production, social and cultural life," an LDPR representative said.

Left-wing forces other than the Communists are expected to hold an Anti-Capitalism Rally in the center of Moscow under the slogan "Our Modernization Means Socialism."

The Solidarity movement will also stage its rally in Moscow as its organizers have promised to hold "a festival of arts and protest."

Russian police have been on high alert in preparation for the holiday, which will last until May 3 this year.

According to police officials, major security measures will be focused on preventing terrorist acts in public places and during mass rallies all around Russia.