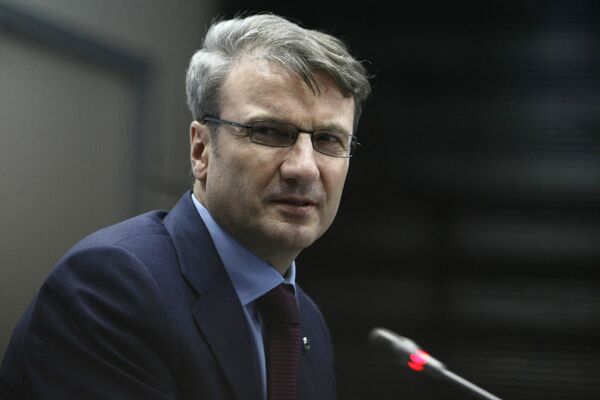 © RIA Novosti . Georgiy Kurolesin
/
Go to the photo bank
Subscribe
German Gref, the head of Russia's largest bank, Sberbank, has played down risks to foreign investment in Russia ahead of the 2012 presidential election.

German Gref, the head of Russia's largest bank, Sberbank, has played down risks to foreign investment in Russia ahead of the 2012 presidential election.

Prime Minister Vladimir Putin and President Dmitry Medvedev have said they will choose in the next few weeks which one of them will stand, but rumors of a rift in the ruling tandem are causing unease.

"There will be a parliamentary election [in December], and presidential vote [next] spring. This will create some uncertainty but it won't be a problem for new investors," former economy minister Gref told reporters during a visit to the United States on Friday.

He said Russia needs radical reform to diversify its economy away from a dependence on oil and gas.

"We need to reform the legal system, pensions, healthcare, education and all other institutions," Gref said. "Significant improvements to the business climate and further privatizations are also needed."

"The state should reduce its presence in the economy as the owner of assets, and, at the same time, enhance its activity as an economic regulator."

Medvedev, who has built a reputation as the softer, more liberal voice of the ruling duo, has appeared to stand up to his mentor Putin in recent weeks.

In a shock move last month, Medvedev ordered government ministers - most of them Putin's allies - to give up their seats on the boards of state firms.

During an address to parliament last week, Putin warned against "unjustified liberalism" and "social demagogy."