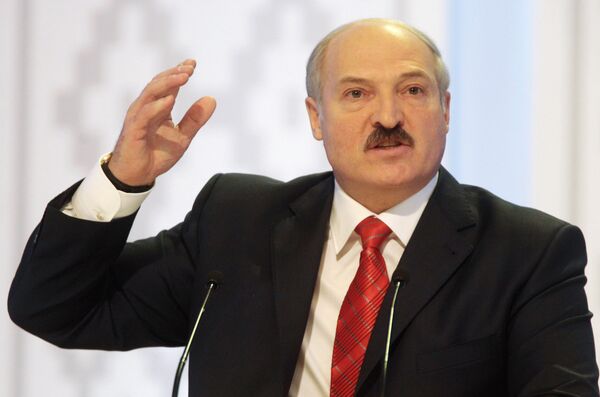 The Ukrainian Foreign Ministry has expressed its indignation over Belarusian President Alexander Lukashenko's statement about the Ukrainian leadership.

The Ukrainian Foreign Ministry has expressed its indignation over Belarusian President Alexander Lukashenko's statement about the Ukrainian leadership.

"On such day, any quarrel or accusation is tantamount to dancing on the bones of the dead. That's why unprecedented comments by Belarusian President Alexander Lukashenko cause even greater indignation," the Ukrainian foreign ministry said.

Lukashenko, whose country was severely affected by the 1986 Chernobyl disaster, did not attend commemorative events in Chernobyl. When asked about the reasons, he said: "ask this question to Yanukovych... Unfortunately, the present leadership of Ukraine is lousy enough."

The Ukrainian foreign ministry said in response: "personal accusations are inadmissible in communication between individuals, especially when offensive remarks are directed against political leaders, who represent sovereign states and even groups of states."

Ukraine marks on Tuesday the 25th anniversary of a deadly explosion at the No 4 reactor at the Chernobyl Nuclear Power Plant. Though the blast-hit reactor itself was located on the Ukrainian territory, winds brought the radioactive cloud to Belarus, where about 60% of the fallout had landed.

Lukashenko also lashed at European Commission President Jose Manuel Barroso, who asked the Ukrainian leadership to exclude the Belarusian president from a conference on the Chernobyl nuclear disaster.

"Who does that ass Barroso think he is anyway?" Lukashenko said. "There was once a Barroso in Portugal, but they kicked him out and put him to work in the European Commission instead."

Last month, Ukraine had been told that Barroso would not travel to the international donors' conference on Chernobyl in Kiev if Lukashenko attended.