Yeltsin and Gorbachev: This town ain't big enough for the both 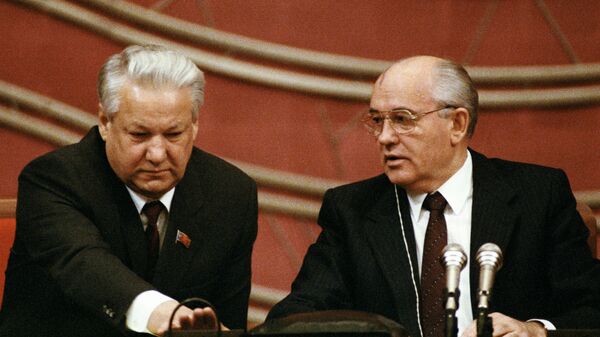 One capital city was certainly not big enough for the both of them. The role of "great men" in history is greater than vulgar Marxists would have you believe, but the fact is that whoever became the first Russian president - even a loyal Gorbachev supporter - would have come into conflict with the Soviet president over how to divide up power, ministries and revenue.

This would have weakened the union government and strengthened the Russian republic unless Gorbachev abolished the new Russian presidency. Two heads of state, with one state being part of the other, would never be able to coexist peacefully. A diarchy would have been the only possible model of government.

Vladimir Lenin, one of the greatest political thinkers of all times, wrote about the "still weak and embryonic, but real and growing" government that formed alongside the Provisional Government after the Russian Revolution of 1917. Two power centers in one country inevitably leads to competition if not all-out civil war. A diarchy inevitably tears a country apart.

Moving from theory to the specific situation that emerged in 1991, Russia indeed had two power centers, two sides locked in conflict.

The RSFSR's governing institutions were "real and growing" and no longer "weak and embryonic." They were pushing to give precedence to the Russian republic's laws and jurisdiction over those of the Soviet Union.

The only thing that the "junior" leader lacked was an official status equal to his "senior." The law on the president offered a path to greater legitimacy, conferred by a general election. The law actually made Yeltsin more important than Gorbachev who bypassed the "general, direct and fair vote" part.

Did Russian lawmakers, the "people's deputies," realize what empowering the president of the Russian republic would lead to? Part of them certainly did, and they acted deliberately, pinning their hopes on Yeltsin as the only possible candidate. But there were others who voted for that law although they were not Yeltsin's supporters.

Unlike the Soviet referendum, this decision on the Russian presidency was faithfully implemented, driving yet another nail into the Soviet Union's coffin. Some of the lawmakers who voted for the presidency law on April 24 didn't know what they were doing. But the process was already underway. In fact, it began on June 12, 1990, when over 1,000 lawmakers approved the Declaration of National Sovereignty of the largest and most important of the Soviet republics.

Naturally, a sovereign state like the RSFSR could not function without a full-fledged leader. A general election was called, and Yeltsin's threw his hat into the ring. But that is another story, one that merits its own article.

The new law was very concise and gave the president very limited powers. He was not authorized to dissolve the legislature (the Congress of People's Deputies and the Supreme Soviet) while those bodies had the authority to remove him from office, albeit by a two-thirds majority and after a Constitutional Court ruling - a reasonable separation of powers, similar to the United States' strong presidential republic.

The law on the Russian president was written by experienced lawyers who tried to think ahead and set up an effective system of checks and balances between the different branches of government. But in reality, they planted several time bombs in this structure, which were destined to blow the upper echelons sky high.

From the start, these checks and balances were too constricting for Boris Yeltsin, the man the system was tailored to. He tried for a while to press the lawmakers to expand his powers before he dissolved the legislature by force in the fall of 1993. This historic law survived just two and a half years.

But that all lay in the future. In April 1991, Boris Yeltsin and his growing team felt strong and optimistic. They were planning their election campaign and were determined to win.