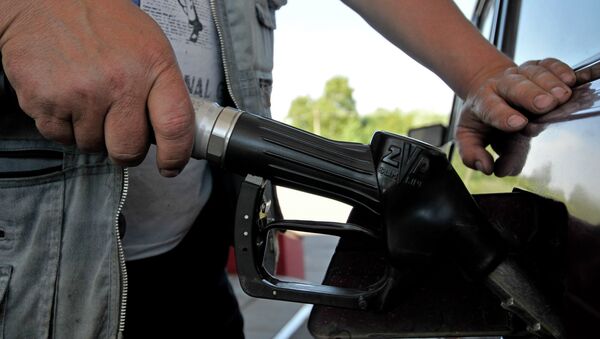 Many Russian regions are running short of gasoline and diesel fuel, with the situation threatening to deteriorate soon into a complete drought in some areas as oil companies cash in on higher fuel prices abroad, the Russian Fuel Union warned on Tuesday.

Many Russian regions are running short of gasoline and diesel fuel, with the situation threatening to deteriorate soon into a complete drought in some areas as oil companies cash in on higher fuel prices abroad, the Russian Fuel Union warned on Tuesday.

"If the situation persists, many regions may be left without fuel altogether in the next few days," said RFU President Evgeny Arkusha, whose organization represents fuel retailers.

The situation is at its worst in the St Petersburg, Voronezh, Novosibirsk and Altai regions as well as the Sakhalin island, he said.

Prices for oil and oil products have risen sharply on foreign markets recently against the background of events in the Middle East, but the Russian government has held local prices back making export more attractive, Sergei Vakhrameyev, a senior analyst with Metropol brokerage, explained.

"Oil producers have started exporting more oil products, which has finally resulted in a fuel deficit on the domestic market," he said.

Fuel retailers agree. "Administrative interference in the industry must ... be removed," said Arkusha of the RFU.

"This may be one of the kinds of cartel agreement for which the antimonopoly legislation includes criminal responsibility as a measure of last resort," Federal Antimonopoly Service head Igor Artemyev said in a statement after a Monday meeting with fuel unions.

Kommersant business daily said most independent gasoline stations in the Altai region in southern Siberia had ceased operations this weekend, while working stations had hiked prices 20 percent. Rosneft was only selling 20 liters of gasoline per car, it said.

The Altai branch of the FAS launched a suit against Rosneft and Gazprom Neft on Tuesday on suspicion of price collusion.

Rosneft said it had not cut supplies to the Altai region in March and April and would send more fuel to the region.

"The situation is caused primarily by lower supplies by other oil companies and independent traders," it said.

The situation has been exacerbated by the fact that the sowing season is near, prompting strong demand for diesel for agricultural vehicles like tractors. Russia desperately needs a good harvest this year if it wants to hit the government's inflation target of 6-7 percent and lift the grain export ban it introduced after last year's unprecedented drought.

Arkusha, who is also president of the Moscow Fuel Association, said the fuel shortage was approaching Moscow and the region, although the situation was not yet critical.

"I want to stress, one can feel signs of fuel deficit," he said, but said a repetition of the Altai situation was impossible in Moscow.

He said that Moscow's key suppliers, the Ryazan and Yaroslavl refineries had cut output, while the Moscow refinery was jammed with tankers awaiting deliveries.

Sergei Zakursky, co-owner of a filling station network in the city of Tomsk in Siberia said regional stations only had a three or four day reserve of fuel.

"Our source of gasoline is running low. I think there will be gasoline later, but it will come in in small portions," he said.

Oleg Ashimkhin, head of the St Petersburg Oil Club, said the northern capital may encounter a fuel deficit in a week or so.

"Today wholesale prices equal those at filling stations, while demand is exceeding supply. Even if you have money, there is no place to buy fuel," Ashimkhin said, adding that 45 percent of stations in the city were private and faced serious problems. "Not a single oil company is selling fuel to them."

Investcafe analyst Grigory Birg said supplies would stabilize in a month or two.

"If necessary, the government may get involved in resolving the problem," he said.

"Rosneft has decided today to supply more diesel fuel and gasoline to the Altai. I think other companies will follow suit."