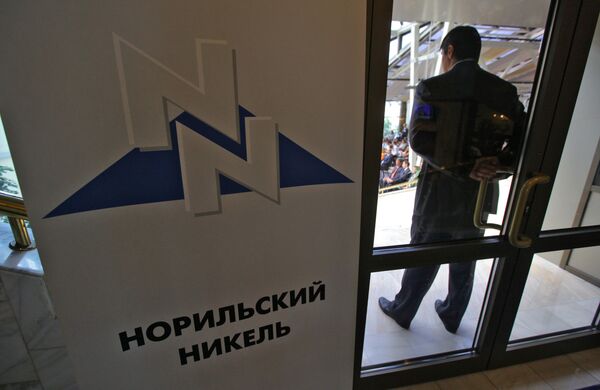 "There are no talks about mergers or possible shares swap deals, but everything is possible in future," Klishas told Rossiya 24 TV channel.

Klishas said Norilsk would not make new offers to RusAl, the world's largest aluminum company and one of its core shareholders, to buy its stake in the company.

"Norilsk Nickel is not going to make any new offers to RusAl," he said.

RusAl, owned by Russian billionaire Oleg Deripaska and Interros, the investment arm of another Russian billionaire Vladimir Potanin, have long been fighting for control of Norilsk Nickel. Interros has previously offered to buy RusAl's 25 percent stake in Norilsk for $12 billion and 20 percent of its shares for $12.8 billion but the aluminum company rejected both offers.

At an extraordinary shareholders' meeting in March, Interros gained four seats on the Norilsk board, while RusAl and Norilsk management, regarded as being close to Interros, got two seats each.

RusAl's nominee Alexander Voloshin chairs the board. Klishas said there would be no drastic changes in company's strategy after Voloshin's election, because Interros and RusAl had different strategic interests.

Klishas said the company's management would make recommendation about possible 2010 dividends in May, adding that dividend policy might be the same as it was last year, i.e. 20-25 percent of net profit.

Norilsk's net profit in 2010 stood at about $5 billion, according to preliminary data.