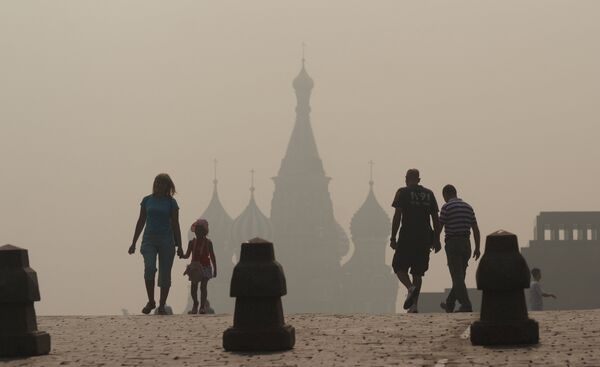 © RIA Novosti . Konstantin Chalabov
/
Go to the photo bank
Subscribe
Over the past year alone Moscow was affected by different climate anomalies – last summer’s two-month heat wave, winter’s ice rain and recent April snow. Is it a tendency? If so, what may be next? Nikolai Yelansky, head of the trace gas laboratory at the A.M. Obukhov Institute of Atmospheric Physics of the Russian Academy of Sciences, answers these questions and also claims that due to the growth of worldwide industrial production, weekly work cycles now can influence the global climate.

Over the past year alone Moscow was affected by different climate anomalies – last summer’s two-month heat wave, winter’s ice rain and recent April snow. Is it a tendency? If so, what may be next? Nikolai Yelansky, head of the trace gas laboratory at the A.M. Obukhov Institute of Atmospheric Physics of the Russian Academy of Sciences, answers these questions and also claims that due to the growth of worldwide industrial production, weekly work cycles now can influence the global climate.

People were alarmed to learn that the ozone hole over the Arctic is growing. What does this mean for us?

It means that we are witnessing a unique phenomenon – the expansion of the ozone hole over the Arctic, even though it was thought that such a large ozone hole would only be a temporary phenomenon. On April 3 and 4, it even reached Moscow, which is why we had warm and sunny weather, with levels of UV radiation approximately equal to those over Greece or the Crimea.
Some believe that the world will end in 2012. Will it? Or is the situation not that bad?

The ozone hole itself is not very dangerous because it is located over the Arctic, and not many people live there, whereas ultraviolet rays pose no threat to water and marine ecosystems. So the ozone hole will not have any direct negative effects, but one cannot rule out other consequences, including unexpected ones we cannot predict.

What consequences could there be?

Ozone is heat reactive: it absorbs UV rays and even infrared radiation. When the air warms, atmospheric composition and global atmospheric circulation can change.

Does this mean temperatures will change? If so, how?

It is difficult to say how temperatures may change. In the troposphere, below 10 kilometers [from the earth’s surface], ozone traps heat; it is a greenhouse gas. But in the stratosphere, ozone absorbs solar radiation and hinders its movement towards the Earth, thus preventing its excessive heating.

Changes in the balance between ozone levels in the troposphere and stratosphere may have unpredictable consequences, such as changes in atmospheric wave activity and weather cycles. About 70% of ozone holes are a natural phenomenon, with man-made influence accounting for no more than 30%.

What can humankind do to improve the situation?

The atmosphere is saturated with waves; it is a powerful resonant system. We know that weather cycles change every five to seven days on average, with cyclones giving way to anticyclones and high atmospheric pressure replaced by low pressure. These internal atmospheric changes are complemented by external influences, such as solar activity, and together they form a complicated system of wave processes.

Recent research conducted by many different scientists has revealed an interesting interdependence. Industrial production worldwide has reached such a scale that weekly work cycles now also influence the atmosphere.

By monitoring atmospheric composition in Moscow, we have established that the concentration of gases and aerosols released by vehicles and industry grows rapidly from Monday to Friday. These dangerous substances rise into the atmosphere, creating conditions for the formation of clouds, which in turn alters the thermal balance.

The same happens in Europe. During the working week, a “cap” of dangerous emissions forms in the troposphere, but their concentration plummets during weekends.

Apart from five- and seven-day cycles, there are also 27-day cycles, as shorter cycles coincide and overlap, resulting in blockades. A pertinent example is last summer’s two-month heat wave in Moscow, when a cyclone and an anticyclone overlapped and blocked western winds from the Atlantic.

The hole in the ozone layer is another example of such a blockade, which formed two months ago and where ozone is depleting.

Theoretically, we can change this system of resonance and cycles. The world’s three largest centers of human activity are the United States, Europe, and China and Japan. We need to create a wave. For example, if the working week is five days in the United States, eight days in Moscow, and four days in China, the weather will change within a week.

A coordinated change in the working week can produce or dampen these atmospheric waves. We are now working on a model that will allow us to measure the effect of coordinated action like this by several countries on the climate.

Can you imagine a situation when several countries agree to operate in the same cycle to damage some other country? Is that possible?

I don’t think joint activity by two or three countries could seriously change the cycle. Presumably that would only happen if a large number of countries were to take coordinated action.

How soon can we expect countries to take joint action to change the climate?

I don’t think that could happen any time soon. A recent conference on climate protection has not produced definite results. The trouble is that each country has its own interests. Developing countries want to expand their industrial production and transport infrastructure, whereas industrialized states want to reduce the economic role of harmful industries. Therefore, it is very difficult to formulate a common policy in this sphere because it would run counter to many countries’ industrial interests.
However, I think that ultimately all countries will come to an agreement on this, because man’s impact on nature has become obvious and may eventually result in very unpleasant consequences.

Thank you for your time and opinions.