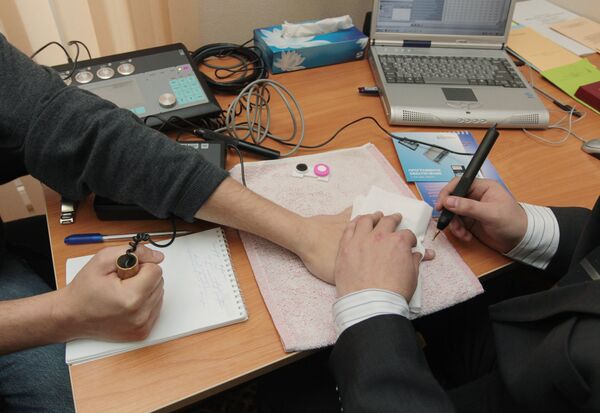 © RIA Novosti . Валерий Мельников
/
Go to the photo bank
Subscribe
Russian schools will introduce a program of annual drug tests that will be able to detect traces of drugs up to six months after they have been consumed, Marina Myagkova of Moscow Narcology Center said on Thursday.

Russian schools will introduce a program of annual drug tests that will be able to detect traces of drugs up to six months after they have been consumed, Marina Myagkova of Moscow Narcology Center said on Thursday.

"We will test pupils' blood for amphetamines, barbiturates and opiate-specific antibodies. The antibodies remain in the blood for five or six months," Myagkova said.

The first drug tests were carried out in 2005 among 713 university students. "We got shocking results: 72 of the students taking part in the research used drugs. This is 10 percent."

Pupils will be tested with their parents' permission.

Medvedev said treatment should not be an alternative, but understood as a means of punishment.

Around 30,000 Russians die from heroin abuse every year, and the country's HIV rate is skyrocketing, in large part due to intravenous drug use.

Russia has been severely affected by the flow of drugs from Afghanistan since the Taliban were ousted a decade ago. Officials in Moscow have accused coalition forces in Afghanistan of not doing enough to curb drug production there, which has helped to sustain the estimated 2.5 million drug users in Russia.