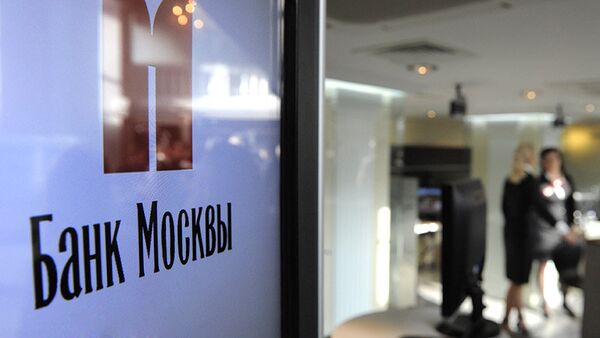 Shareholders in Bank of Moscow elected former VTB employee Mikhail Kuzovlev as the bank's president on Thursday, Bank of Moscow said, ending a dramatic fight for control over the capital's lender.

The meeting was attended by 77% of Bank of Moscow shareholders. Kuzovlev got 99.97 percent of the overall vote.

Kuzovlev has been performing the president's duties since last week after a court suspension of two other candidates, the former Bank of Moscow head Andrei Borodin and his first deputy Dmitry Akulinin, from the bank's management due to a criminal probe into a 12.76 billion ruble loan ($455 million) granted by the bank to an obscure real estate company linked to the wife of former Moscow mayor Yury Luzhkov's wife Yelena Baturina.

The meeting also unanimously voted for an early dismissal of Borodin, who is currently in London.

Borodin claims he is receiving medical treatment there.

A politically-tinged fight for control over Bank of Moscow has been going on since February, when VTB announced a gradual acquisition of Luzhkov's investment vehicle.

The Moscow government sold its 48.46% stake in the bank to VTB after President Dmitry Medvedev fired Luzhkov last fall over a lack of trust.

In early April, Borodin, a close ally of Luzhkov who fiercely opposed the acquisition of the bank by state-controlled VTB, said he had sold his 20.3% stake in the bank, jointly owned with his aide Lev Alaluyev, to Vitaly Yusufov, son of former Russian energy minister Igor Yusufov, but was unhappy about the price of the deal.

At Thursday's vote, VTB head Andrei Kostin said the Bank of Moscow annual shareholders' meeting would elect a new board of directors in the nearest future, "in accordance with the preferences of existing shareholders". He also said VTB still intended to acquire 100% of the bank.

Yusufov told reporters he considered raising his stake in Bank of Moscow and did not rule out the possibility of its sale to VTB. He declined to mention his valuation of the bank.