What is more dangerous for the enviroment – chemical weapons or ignorance? 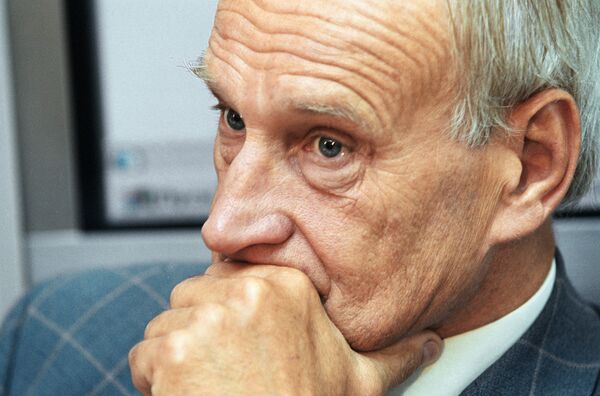 © RIA Novosti . Vladimir Vyatkin
/
Go to the photo bank
Subscribe
When speaking about the arms race, people tend to mention nuclear rather than chemical weapons. But ecologists consider the latter one of the biggest threats to the environment. Professor Sergei Baranovsky, President of Green Cross Russia, tells RIA Novosti’s Samir Shakhbaz what steps are being taken to reduce this threat.

When speaking about the arms race, people tend to mention nuclear rather than chemical weapons. But ecologists consider the latter one of the biggest threats to the environment. Professor Sergei Baranovsky, President of Green Cross Russia, tells RIA Novosti’s Samir Shakhbaz what steps are being taken to reduce this threat. He also suggests that environmental ignorance is the main source of many ecological problems in Russia.

You often say that nuclear energy is not the greatest environmental threat that we face today. What are your priorities then?

One of the Green Cross’ main priorities is dealing with the aftermath of the arms race, primarily with chemical weapons.
Over the past 15 years, Green Cross Russia and Green Cross International have been monitoring the destruction of chemical weapons, that is, the fulfillment of the convention signed by the Soviet Union and ratified by Russia, according to which we must destroy all the 40,000 tons of chemical weapons we have.

You know that one milligram of a chemical agent could kill all of us sitting in this room. There is always a probability of chemical weapons polluting the environment, even though there have been few such cases to date. The worst part concerns the risks involved in destroying chemical weapons, which can be very serious.

Americans, who are leading the process, had 32,000 tons of chemical weapons and have already destroyed over 70% of them. We have so far destroyed only about 50% of our arsenals. We monitored the process until it became clear that it has passed the point of no return, that the technology meets all the requirements, including environmental ones, and that efforts should be redoubled to implement the convention by ridding the world of these weapons of mass destruction.

Green Cross Russia and other [environmental] organizations also oppose the nuclear arms race, which we see as the core reason for the nuclear industry’s existence. Environmental education and enlightenment is another objective we have had since we were established. I can tell you that our society is environmentally illiterate.

Is it illiterate or indifferent?

It is indifferent because it is illiterate. Environmental literacy, working with the public and formal ecological education are what matter most. Unfortunately, our country is now lagging far behind in all this.

Our officials have even cut the environmental education component from the school syllabus, even though it had been taught to several generations of Russian children. It will no longer be taught as a separate subject, instead it has been diluted and distributed among the other subjects. Furthermore, the amount of knowledge offered is woefully inadequate.

But the worst part is that the generation that has not been taught ecology acts so barbarically. Look around and you will see people drop litter, and not just burned matches and cigarette butts. The snow is melting now, and you can see what we are doing to the environment. The effects of this barbarous attitude are dramatic.

Another problem the international community cannot find a solution to is cars. Everyone wants to have a car. Some public organizations encourage people not to drive their cars at least one day a year, which is a very noble idea. But people cannot give up their cars completely, and so it will take very hard work to neutralize the damage these vehicles do to the environment.

Some countries are doing this. We in Russia have invented a Yo-Mobile, which is much more environmentally friendly than other cars. There are also the hybrid cars Toyota created which have now gone global.

Environmental pollution exceeds all possible norms in Moscow in any weather, but levels are especially high when there is no wind.

Is this a peculiarly Russian problem, or does it also blight large cities in other countries with higher levels of environmental literacy?

One apt example is Tokyo, which I visited in the 1970s on a research trip. You could not breathe normally in its streets back then. Traffic cops wore face masks. The concentration of exhaust gases in the atmosphere was extremely high. But since then the Japanese government and scientists have all but resolved that problem, or at least they have found a way to dramatically reduce the pollution level.

First of all, they introduced and enforced much stricter standards. What is being done in Russia toward this end? We recently adopted the Euro 2 motor fuel standard, but debates over the decision are still continuing, even though the rest of the world is already using Euro 4 and will soon adopt the Euro 5 standard, which will certainly improve the environment in large cities.
We are only at the beginning of the road. Environmentally more advanced countries are way ahead of us.

But were those positive results really achieved due to environmentalists? I am highly skeptical. There must be a lobby advocating new standards in order to receive huge allocations.

No, this is an objective process. The better the fuel, the less pollution it causes. And if we switch from petrol to electricity, we would completely cut emissions, and the air in our city will once again become breathable.

I often visit Switzerland, where the air and, something that is also vital, the water are pure. Even in large cities. We in Russia have problems with both. Our water treatment systems, which are a very expensive part of the housing and utilities infrastructure, presumably purify water, yet everyone will tell you not to drink tap water, and not only in Moscow. In fact, the further from the capital, the worse it gets.

But in Switzerland they recommend people to drink tap water because it is a factor beneficial to health and the environment. In short, we have a great deal of work ahead.