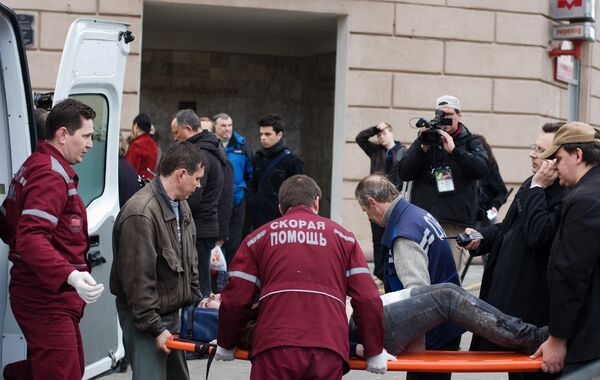 © RIA Novosti
Subscribe
Belarusian President Alexander Lukashenko on Tuesday hit out at Western powers for "not sending condolences" to the people of Belarus following a deadly bomb attack in the capital, Minsk.

Belarusian President Alexander Lukashenko on Tuesday hit out at Western powers for "not sending condolences" to the people of Belarus following a deadly bomb attack in the capital, Minsk.

A bomb packed with nails and bail bearings went off at the height of the rush hour in the Oktyabrskaya metro station, one of the city's busiest, on April 11. At least 13 people were killed and scores more were injured.

A number of people - all from Belarus - have been arrested over the attack.

"I don't understand how civilized and democratic countries could not express their condolences to the Belarusian people," Lukashenko said. His spokesperson said the United States and Britain were among the countries he was referring to.

U.S. State Department spokesman Mark Toner said on April 12: "We condemn this heinous act that demonstrates a complete disregard for human life...And in this moment of sorrow, we... offer our sympathy to the families and loved ones of those injured or killed."

The UN Security Council took the unusual step of referring to the blast as an "apparent terrorist attack." Analysts have said the decision was taken over widespread suspicion in the West and elsewhere that Belarus security forces may have been behind the attack. There has been virtually no terrorist violence in Belarus during Lukashenko's 17-year rule.

Opposition figures in Belarus said they believed the blast would be used as an excuse for a new crackdown.

Lukashenko, who has ruled Belarus with an iron fist since 1994, won re-election in disputed polls in December. Dozens of opposition figures including political rivals were arrested after violent protests in Minsk following the announcement of the result.