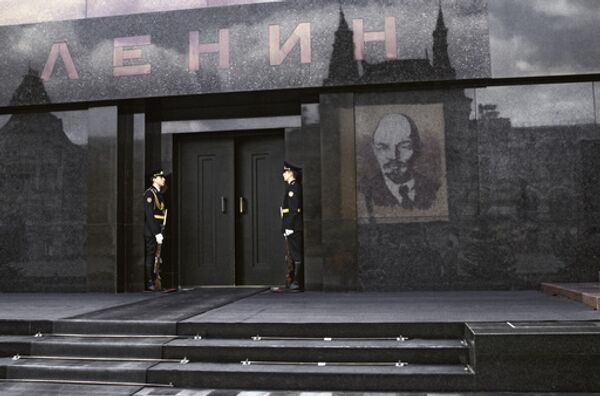 The mausoleum on Moscow's Red Square, where the embalmed body of Communist leader Vladimir Lenin is kept for public display, will be reopened on Tuesday after regular maintenance works.

The mausoleum on Moscow's Red Square, where the embalmed body of Communist leader Vladimir Lenin is kept for public display, will be reopened on Tuesday after regular maintenance works.

Eighty-seven years have passed since the body of Vladimir Ulyanov, known worldwide under his pseudonym Lenin, was placed in a glass sarcophagus and displayed in a specially built granite mausoleum near the Kremlin wall.

The mausoleum closes every year and a half for maintenance works, which usually last for some six weeks.

Throughout the years of Soviet rule, the Lenin mausoleum became a symbol of the Soviet Union, and crowds of Soviet citizens and numerous delegations from foreign countries visited the tomb.

However, voices of those willing to remove the Russian revolutionary leader's embalmed body from his granite mausoleum on Red Square and bury him are becoming stronger today, 20 years after the issue first emerged with the breakup of the Soviet empire.

According to a public opinion poll conducted in February, over 60 percent of Russians want Lenin to be removed from the mausoleum and buried, while 30 percent are in favor of leaving Lenin in the mausoleum as they believe it has long become a major tourist attraction.

The discussion seems set to continue for some time as the opinion of Russia's top leadership remains non-committal.

Prime Minister Vladimir Putin said in 2010 that the time when the Russian people decide on the fate of Lenin's mummy is still to come, adding that history shows a strong dislike for haste and disturbances. President Dmitry Medvedev has never made a public comment on the issue.