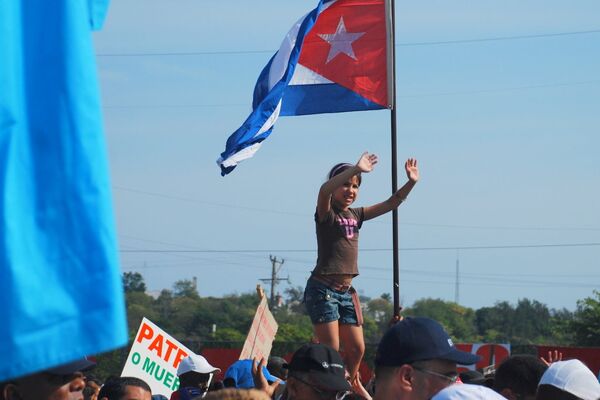 If the world were not so preoccupied with Libya, the crisis at the Fukushima nuclear plant, the Arab revolutions and all their attendant problems for Europe, a lot more attention would have been devoted to the 14th congress of the Communist Party of Cuba in Havana (April 16-19).

If the world were not so preoccupied with Libya, the crisis at the Fukushima nuclear plant, the Arab revolutions and all their attendant problems for Europe, a lot more attention would have been devoted to the 14th congress of the Communist Party of Cuba in Havana (April 16-19).

This is the first congress in the last 14 years and the sixth since the Cuban revolution. The Cuban diaspora in Miami, the biggest in the world, is closely watching this congress, and some people are already hailing it as a turning point. The most worked-up among them are comparing the speech given by President Raul Castro, the brother and successor of Fidel, to Nikita Khrushchev's speech denouncing Stalin's crimes at the 20th congress of the Communist Party of the Soviet Union.

This is an exaggeration, of course. Khrushchev was denouncing Stalin after his death, and the scale is not the same. Yet, the congress was the scene of a serious shake-up of Cuba's political and economic system.

Raul Castro spoke about the mistakes of his brother, other Cuban leaders and the revolution. All the people who made these mistakes are alive, although Fidel stepped down in 2008, having made his younger brother the chairman of the Cuban State Council.

If we are to believe the speeches at the congress, Havana intends to turn Cuba into the mixed economy with its expanded private sector and greater economic freedoms for all Cubans. This will be a cocktail of Vietnamese and Chinese reforms - Maotai liquor with a splash of rum. The party and the government will maintain their leading role in the economy, at least for the time being.

The age of Cuba's leaders is a big factor in Raul's proposals. Fidel is 84. He is sick and was unable to attend the parade devoted to the 50th anniversary of the Bay of Pigs - the invasion of Cuba by CIA mercenaries on April 17, 1961. His younger brother is 80. The youngest leaders are in their 60s or 70s. This is not so old for a politician. The problem is the sheer number of elderly politicians in Cuba.

One of the roughly 300 wide-ranging reforms proposed at the congress is to reduce the average age of the people in power. Toward this end Raul has proposed a limit of two five-year terms for office holders.

The big question mark surrounding the congress is whether Fidel will be re-elected to his nominal post as the party's first secretary. A decision on this issue will be made on April 19, the final day of the congress. At the same time, it will also become clear what younger leaders will come to power.

Marino Alberto Murillo, Cuba's former economics minister and the chief author of the current reforms, is expected to become Fidel's successor. Raul relieved him from his post in March to allow him to focus on transforming the economy. Murillo has retained the post of deputy prime minister. He would be a logical replacement for the ageing leader.

There is something suspicious about old leaders in a one-party state discussing radical reforms to bring more young people into power. That being said, something has to be done, albeit in stages. It could be even more dangerous to carry out shocking, radical changes that will shake up Cuban society from top to bottom.

Cuba intends to start with curtailing its functions as a social or welfare state.

The average monthly salary in Cuba is about $20, but nearly three times as much is spent per capita on services - medical care, education, food and other goods, transport, and subsidizing industry. Raul has announced that Havana will start reducing government subsidies to industrial enterprises, end the rationing of food and other products (with the exception of the poorest Cubans) and expand the meager private sector.

Currently, 85% of Cuba's able-bodied population works at state enterprises. Cuban economists estimate that as a result of cuts in subsidies at least one million people (some put the figure at 1.5 million) will lose their jobs. This is quite a change for an island with a population of 11.5 million. The only hope is that the laid off workers will find work in small and mid-sized business in the expanding private sector. This is similar to the Vietnamese reforms in the late 1980s and 1990s.

Needless to say, Cuba will not plunge itself into a sea of government management. Raul says the first stage of reforms will last for five years. The old guard is not happy about the imminent changes, especially the social aspect.

However, the question is not whether the reforms are necessary but rather if the Cuban leadership is capable of implementing them.

The winds of the Arab revolutions were bound to reach the Cuban leadership sooner or later. Although Cuba is not the poorest state in the Caribbean (some of its countries are much poorer, for instance backward Haiti), everyone understand that changes are necessary.

Cuba will have to fully transform its economy and rewrite (that is, renounce) the socialist "social contract". There is no point speculating who of the old guard will remain in power. All must go. They will be irrelevant in the new market economy. Economic reforms will inevitably be accompanied by political changes. Havana has already freed all political prisoners.

It remains to be seen whether the reforms will be a facelift of Cuban socialism or the start of a transition to a completely new political, ideological and government model. In any event, the changes proposed by Raul, if he is serious, will go far beyond skin-deep.

The success of the Cuban reforms will depend only partly on the Cuban leadership and society. Cuba is not a poor country but its income primarily comes from the export of sugar, nickel and some other minerals. The price of these commodities is subject to strong market volatility. Tourism can bring in much needed revenue, but to develop its tourism industry Cuba needs investment in the necessary infrastructure and the construction of hotels. Oil and gas have been discovered off Cuba's shores but not as much as was expected. And besides, the deposits have yet to be developed.

The success of Cuba's economic reforms will depend to a large degree on the United States, which maintains a nearly 50-year trade embargo on Cuba. True, Canadians and Germans are already coming to the island, but everyone understands that it is impossible to plan any serious economic revival without trade, investment and tourists from Cuba's main neighbor.

However, there are powerful forces (read: the Cuban emigre community) in the United States that would not like to see Cuba's economic revival or the strengthening of its leadership. Some people from its younger generation do not feel at home in Miami. They hope to see Cuba's democratic upheavals, so they can make a triumphant return to their homeland and take part in the division of its economic and political spoils.