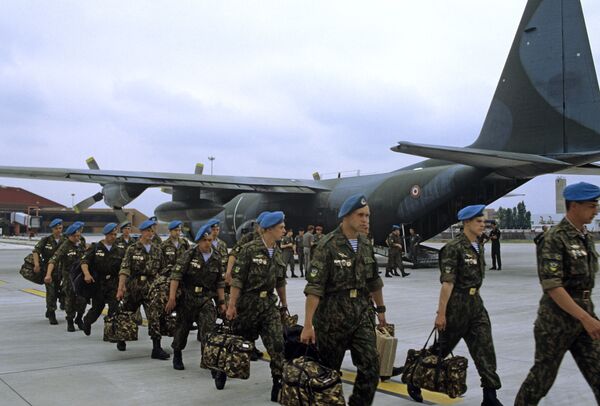 Russian troops will be wearing berets for the first time next month as they march in the annual parade to mark victory in World War II.

Russian troops will be wearing berets for the first time next month as they march in the annual parade to mark victory in World War II.

Most of the nation's soldiers will eventually be kitted out in the new berets, Defense Ministry spokesman Vladimir Drobyshevsky told reporters on Friday.

The Air Force will wear light blue berets, similar to those Paratroopers have worn for many years, and the Army and other services will wear military green.

The only exception is the Navy, Drobyshevsky said, as sailors will stick to their traditional peakless cap, although other branches of the Navy, such as the Coast Guards, will get black berets.

Russian soldiers currently wear field caps, which experts say is a hangover from Soviet times and serves to maintain the rivalry of the Cold War.

So on May 9 it will be bereted troops who will march through Moscow's Red Square to mark 66 years since the end of World War II, known in Russia as the 1941-45 Great Patriotic War.

Last year's 65th-anniversary event took on special meaning as troops from Britain, France, the United States and Poland marched across the hallowed cobbles of Red Square for the first time. The parade also included a 1,000-strong military band, tanks, missiles and 127 aircraft.