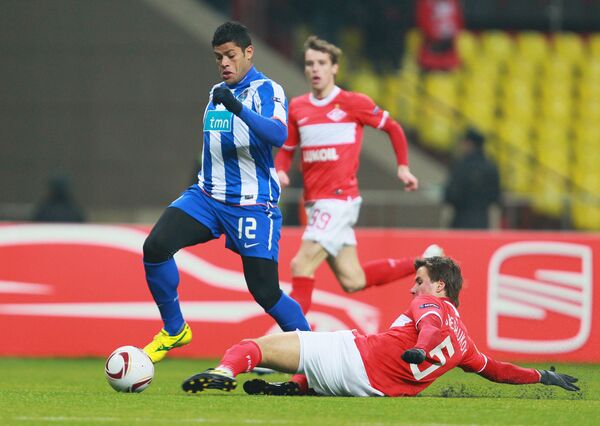 Spartak Moscow, Russia's last representatives in this season's European competitions, were crushed 5-2 by Porto at Luzhniki Stadium, crashing out of the Europa League quarterfinals 10-3 on aggregate.

Spartak Moscow, Russia's last representatives in this season's European competitions, were crushed 5-2 by Porto at Luzhniki Stadium on Thursday night, crashing out of the Europa League quarterfinals 10-3 on aggregate.

The Muscovites were playing for little more than pride after losing the first leg 5-1 in Portugal, and any slim hopes the Spartak fans may have had were snuffed out in the 28th minute when Brazilian Hulk sprinted through the home defense and fired past Andrei Dikan.

Two goals in three minutes - a header from a corner by Cristian Rodriguez on the stroke of halftime and a tap in for Freddy Guarin after Dikan had saved Falcao's shot two minutes after the restart - hammered home the gulf between the two sides before Spartak's towering striker Artyom Dzyuba wriggled through the Portuguese defense to notch a consolation goal in the 52nd minute.

Falcao restored Porto's three-goal lead two minutes later before Spartak substitute Ari scored another individual goal - slaloming past two defenders before rounding the goalkeeper and slotting home - in the 72nd minute. There was still time for the visitors to match their five-goal haul from the first leg, with Ruben Micael scoring the 13th goal of the tie with a minute remaining.

The glut of goals in this open and entertaining tie will hardly be any consolation for Spartak's fans, who whistled their team off the Luzhniki pitch at halftime and fulltime of Sunday's 0-0 draw with Terek Grozny, which left them second-bottom of the Russian Premier League.

After the thrashing administered by Porto, coach Valery Karpin will now have to lift his young team for Sunday evening's game against Anzhi Makhachkala and show the fans that their pre-season ambitions are worth clinging to.