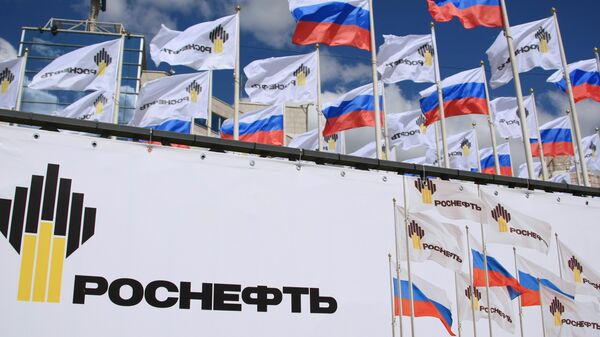 © RIA Novosti . Mikhail Fomichev
/
Go to the mediabank
Subscribe
International
India
Africa
BP and oil major Rosneft agreed on Thursday to extend the deadline for their $16 billion share swap to May, in a last minute effort to save a deal blocked by the Russian shareholders of BP's local venture, TNK-BP.

BP and oil major Rosneft agreed on Thursday to extend the deadline for their $16 billion share swap to May, in a last minute effort to save a  deal blocked by the Russian shareholders of BP's local venture, TNK-BP.

"BP announced today that it has agreed with Rosneft to extend the deadline for completing the share swap agreement ... to 16 May 2011," BP said in a statement, referring to a swap deal under which Rosneft is supposed to exchange 9.5% of its stock for 5% in BP.

The deal also includes plans to jointly develop oil production in the Russian Arctic, but both parts of it were blocked by a court injunction earlier this year following suits from Alfa Access Renova, or AAR, representing the Russian shareholders in TNK-BP. They claim BP violated a TNK-BP shareholder agreement when it signed the Rosneft deal. The agreement stiputlated BP can only start Russian projects following approval from TNK-BP.

"BP intends to continue with the arbitration process to obtain a final award on all outstanding issues, including whether or not the interim injunction should continue," the company said.

"BP remains fully committed to TNK-BP as its primary business vehicle in Russia and fully supports its strategy and investment program, which should ensure its success for decades to come."

BP also owns a 1.3% interest in Rosneft and has been exploring offshore in Sakhalin for over a decade and engaging in Arctic exploration studies.

Stan Polovets, CEO at AAR, said his company considered investment in TNK-BP as strategic and did not plan to sell its stake.

"AAR is a long-term strategic investor in TNK-BP and has no plans to exit," Polovets told RIA Novosti in an interview late on Wednesday. "TNK-BP is a great company with excellent management and great growth prospects."

AAR now plans to file a $5-10 billion suit against BP for its failure to invite TNK-BP to participate in the Rosneft deal within the next two weeks.

"BP makes a big deal that 'AAR does not know what it wants'. Our position has always been clear - AAR wanted the entire deal turned over to TNK, not some selected parts. And when this proposal was brought to the TNK board - everyone approved it including management and all independent directors," a source close to one of AAR shareholders said.

AAR plans to sue BP for failing to inform AAR and TNK-BP in time about a new opportunity which opened with the Rosneft deal.

AAR and TNK-BP believe that BP's representatives in TNK-BP broke their obligations, leading them to lose the chance to participate in the Arctic project, profits from the share swap and a loss of synergy effect from an alliance with Rosneft.

"BP forgets that its Arctic project and share swap with Rosneft was blocked first by the High Court in London and then by a Stockholm Tribunal precisely because BP had violated its shareholder agreement with AAR," the source said.

"These judicial rulings make clear that BP's actions posed real harm to the interests of AAR and TNK-BP. Responsibility for the loss of the Arctic project, which AAR said right from the start is a good deal for Russia and potentially for TNK-BP, lies with BP and BP alone."