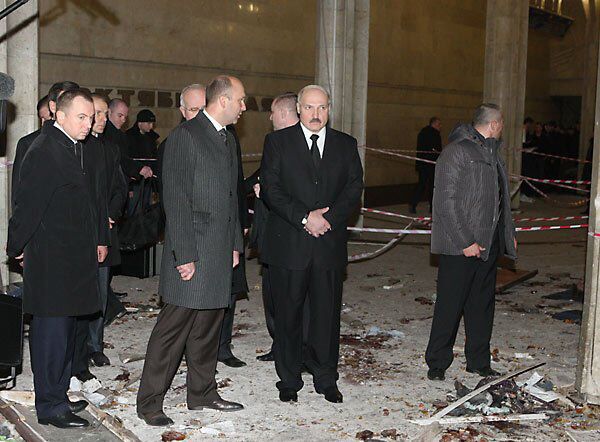 © RIA Novosti . BELta
/
Go to the photo bank
Subscribe
The terrorist attack that tore through a crowded subway station in the Belarusian capital of Minsk has been solved, the country's president, Alexander Lukashenko, said on Wednesday.

The terrorist attack that tore through a crowded subway station in the Belarusian capital of Minsk has been solved, the country's president, Alexander Lukashenko, said on Wednesday.

At least 12 people were killed and scores more injured after a bomb went off at the Oktyabrskaya subway station, one of the city's busiest, at rush hour on Monday evening. Officials say it was a terrorist attack.

"Today ... the crime was solved," Lukashenko said. "The most important thing is that we know how and by whom the terrorist attack was committed," he continued.

"The detainees confessed to committing a terrorist act, not only in the metro, but the attacks on Independence Day, on July 3 and in Vitebsk are on their conscience," Lukashenko said. "It is horrendous, but the fact is: all of these wretches who committed the crime were working in specific labor groups, one was a lathe worker, another - an electrician," he continued.

Lukashenko instructed opposition members be questioned over the attack.

"I have given instructions to review all statements from political leaders," Lukashenko said. "We are looking for accomplices and those who ordered [the act]. These figures from the so-called fifth column may reveal cards and indicate who ordered it."

"Everyone should be prosecuted and questioned, not bearing in mind any democracy, moaning or wailing of foreign martyrs," he continued.

"Not only the authorities have committed this crime, but also the military, police, and even the church," Lukashenko said. "Find and interrogate them as criminals. There is no forgiveness. They create a negative impact and panic honest people," the president said, making demands to prevent any panic in the country.

"Any panic on food or currency must be stopped," Lukashenko said.

President Lukashenko said earlier the attack was an attempt to destabilize the country and "a serious challenge" to the nation.

Lukashenko, who has ruled Belarus with an iron fist since 1994, was reelected in disputed polls in December. Dozens of opposition figures, including political rivals and presidential candidates were arrested after violent protests in Minsk following the announcement of the result.

While Belarus has been free of the Islamist terrorist violence that has plagued neighboring Russia, some 50 people were injured in July 2008 when a bomb went off at an Independence Day concert that Lukashenko was attending.

Lukashenko said those who solved the crime should be awarded.

"We also should financially support the people [who solved the crime], including the solving of their housing problems," he said.

The KGB, as the security forces are still called in the former Soviet state, earlier promised a reward to anyone who had any information on the bombing. The explosive device is believed to have been improvised and radio-controlled.