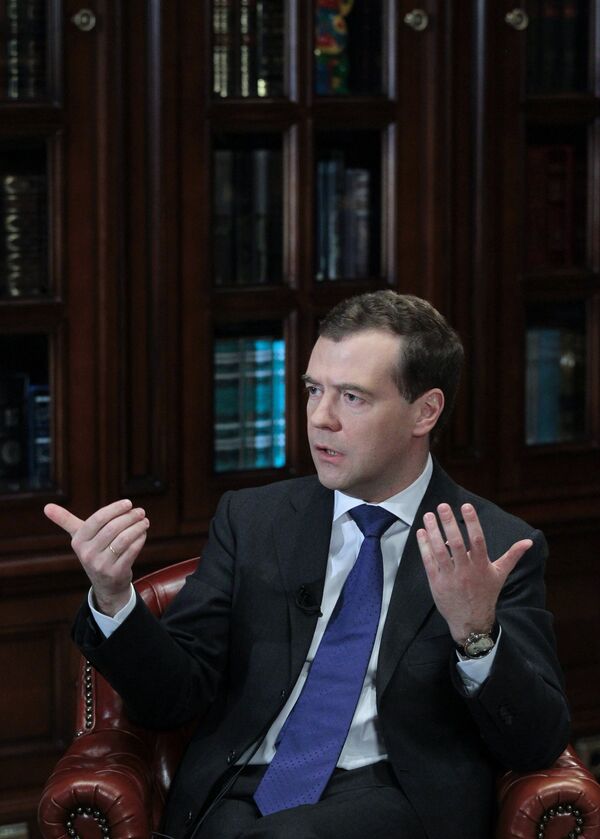 Russian President Dmitry Medvedev says he and Prime Minister Vladimir Putin will decide within a "fairly short time" which of them will run for president next year.

Russian President Dmitry Medvedev says he and Prime Minister Vladimir Putin will decide within a "fairly short time" which of them will run for president next year.

"The decision will be made in a fairly short time because...there is less then a year left [until the election]," he said in an interview with Chinese state television broadcast on Tuesday.

Medvedev said he and Putin had good relations and reiterated that their decision would be based on the existing social and political situation in the country.

"We have friendly, very warm, comradely relations that have formed over the past 20 years," he said.

"Today we have different positions, different roles: I am the country's president, the guarantor of its constitution, the head of state. The government deals with its own affairs such as economy, the social sphere, doing it on a daily basis - this is also a big job," he said.

"As for the future, no one knows the future, but I can tell you that as the current head of state, as the president, of course I think about it - I have to. I don't rule out that I will run for a new term," Medvedev said, adding that the decision would be "based on the existing social situation, political preferences, and - this is the most important - on people's attitude."

Medvedev and Putin are frequently asked who will run for president in 2012, particularly in interviews with foreign media. They each say they will make the decision together, when the time is right.

Medvedev was elected president in 2008 after Putin had served the constitutionally mandated two consecutive four-year terms. The next president will serve for six years due to constitutional changes made early in Medvedev's presidency, and Putin would be able to run for re-election in 2018.