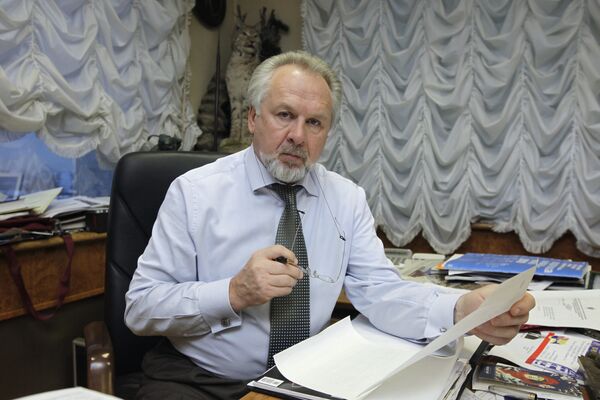 © RIA Novosti . Ruslan Krivobok
/
Go to the photo bank
Subscribe
Russia's media is no longer the force it was in the 1990s and has transformed into an instrument of state control, the editor of a leading daily newspaper said on Tuesday.

Russia's media is no longer the force it was in the 1990s and has transformed into an instrument of state control, the editor of a leading daily newspaper said on Tuesday.

"Today the media can in no way said to be the fourth estate," Moskovsky Komsomolets editor Pavel Gusev said. "In 1991, in the absence of a strong unified leadership, the media really did occupy a leading position."

'It could add something of its own to any political decision and was able to influence the electorate," Gusev - the chairman of the Russian Public Chamber's committee for media issues - told a forum held at the EU's Moscow office.

"But now, the media is an instrument of the authorities," he added.

He also pointed out that some 80% of the Russian media is financed by the state - a situation that he said meant almost all small, regional papers were totally reliant on the authorities for their existence.

Gusev denied that there was any state censorship of the media, but admitted that self-censorship was a major concern. He also said that methods of pressurizing media outlets included limiting access to printing presses and methods of distribution.

In 2010, Russia occupied 140th place out of 178 in a press freedom rating by Reporters Without Borders. The international NGO Freedom House has called Russia one of the most dangerous countries for journalists.

While the alleged lack of an independent traditional media is well-documented, Russia's internet has been hailed as the last place for an open discussion of the country's most pressing problems, and a haven for whistle-blowers and critics of the Putin-Medvedev ruling tandem.

But Gusev was downbeat on the prospect of the internet replacing more established forms of mass media.

"The internet is not a form of media," he said. "It is forms of communication...a mere 10-11% use the internet as a media outlet, the others just use it for purchases, pornography and so on."