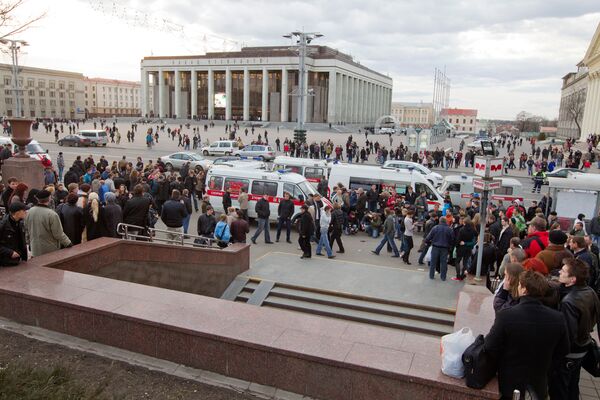 Three people have been arrested in Belarus following a blast that tore through a crowded subway station in the capital Minsk, security officials said on Tuesday.

Three people have been arrested in Belarus following a blast that tore through a crowded subway station in the capital Minsk, security officials said on Tuesday.

At least 12 people were killed and scores more injured after a bomb went off at Oktyabrskaya metro station, one of the city's busiest, at rush hour on Monday evening. Officials say it was a terrorist attack.

Vadim Zaytsev, head of the KGB - as the security forces are still called in the former Soviet state - said three people were held but the culprit may still be at large.

"The KGB is looking into three possible motives for the attack: the destabilization of the situation in the country, revenge by extremist organizations or the act of a mentally ill person," Zaytsev said.

The KGB has earlier promised a reward to anyone who has any information on the bombing. The bomb is believed to have been improvised and radio-controlled. Groups of Russian and Israeli investigators are on their way to Belarus to help with the investigation.

President Alexander Lukashenko said the attack was an attempt to destabilize the country and "a serious challenge" to the nation.

"I don’t exclude that this gift could have been brought to us by outsiders," he said in televised comments on Monday. "But we have to look at ourselves as well."

"Who gained by destroying the calm and stability in the country?" he asked. "Who did not like the stability in Belarus?"

Lukashenko, who has ruled Belarus with an iron fist since 1994, won re-election in disputed polls in December. Dozens of opposition figures including political rivals were arrested after violent protests in Minsk following the announcement of the result.