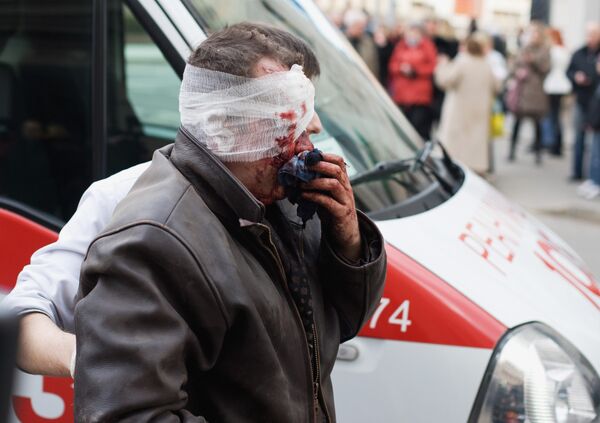 © RIA Novosti . Anton Motolko
/
Go to the photo bank
Subscribe
A bomb equal to 5-7 kg of TNT exploded at a busy subway station in the Belarusian capital Minsk during rush hour on Monday, killing at least 11 people and injuring more than a hundred.

A bomb equal to 5-7 kg of TNT exploded at a busy subway station in the Belarusian capital Minsk during rush hour on Monday, killing at least 11 people and injuring more than a hundred, prosecutors said.

The bomb was planted under a bench at Oktyabrskaya, the only interchange station of the capital's subway system and the city's busiest. The station is also near the offices of President Alexander Lukashenko.

The explosive device, which went off as a train stood at the platform at 5.55 pm (14:55 GMT), was packed with metal objects to cause maximum damage.

The blast was so powerful that it blew a hole in the thick concrete floor of the platform, damaged ceiling and walls and knocked out the nearby rolling stairs. Many victims were injured by pieces of concrete which fell from the ceiling.

Dense smoke filled the station after the blast, but no panic took place.

At least 300 people were in the vicinity when the blast occurred, some 126 of them were injured, including at least two Russians. The condition of 22 patients is critical. Doctors urged people to donate blood for the victims.

Belarusian prosecutors said the blast was a terrorist attack.

At a meeting with officials, president Lukashenko called the blast "a serious challenge" to the nation. He told the KGB - as the country's security services are still known - to "turn the country upside down" to find those guilty.

"I don't exclude that this gift could have been brought to us by outsiders. But we have to look at ourselves as well," said Lukashenko, who arrived at the scene shortly afterwards.

"Who gained by destroying the calm and stability in the country?" he asked. "Who did not like the stability in Belarus?"

Belarusian Interior Minister Anatoly Kuleshov said all cars crossing state borders are being checked. Police across the country was put on high alert.

Nikolai Ladutko, the mayor of Minsk, proposed to declare April 14 a mourning day. The victims will be buried on April 13-15.

The Belarusian leader ordered to probe a possible link between the two blasts, saying that the two attacks "may constitute two links of the same chain."

Russia will also send a team of experienced doctors to Minsk to help Belarusian metro station blast victims, a spokesman for Russian health and social development ministry said. The team will comprise neurosurgeons, intensivists and doctors specializing in blast-related injuries. Many members of the team treated victims of last year's twin blasts in Moscow metro.