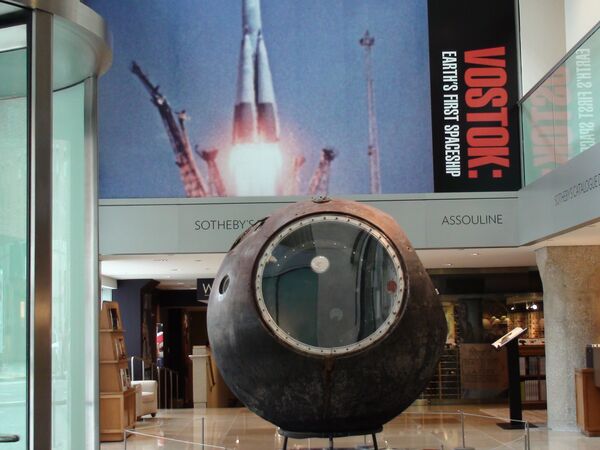 © RIA Novosti . Larisa Saenko
Subscribe
While Russians will be celebrating the 50th anniversary of the first manned space flight on April 12 with impressive 50-salvo fireworks, Sotheby's in New York will be auctioning off the descent capsule of the Vostok 3KA-2 spacecraft in which the dog Zvezdochka safely returned to Earth after a test flight; a sensor-laden mannequin nicknamed Ivan Ivanovich was ejected during the descent and landed nearby.

While Russians will be celebrating the 50th anniversary of the first manned space flight on April 12 with impressive 50-salvo fireworks, Sotheby's in New York will be auctioning off the descent capsule of the Vostok 3KA-2 spacecraft in which the dog Zvezdochka safely returned to Earth after a test flight; a sensor-laden mannequin nicknamed Ivan Ivanovich was ejected during the descent and landed nearby. This successful dress rehearsal set the stage for Yury Gagarin's historic flight.

Ivan Ivanovich, who was sent into orbit twice, was sold for $189,500 in 1993. Now another relic of the Gagarin era will find a home abroad. Of course, a wealthy Russian could buy the capsule, but this is unlikely, and not because of the price tag. On the day of the historic flight jubilee the burnt aluminum alloy capsule is expected to fetch eight to ten million dollars for the current owner, who bought it "privately" a long time ago, although he was ready to settle for $800,000 just a few years ago. But even $10 million is chump change compared to the cost of a decent yacht or a dozen Faberge eggs.

Many of Russia's space "souvenirs" have been sold off since the collapse of the Soviet Union. Officials from Russian Federal Space Agency, or Roskosmos, regularly express regret over the loss of these treasures, but their hopes that some wealthy Russians will reclaim at least some of them are so far in vain.

The raggedy Vostok rocket, one of the world's first spacecraft, still stands defiantly in front of the once popular Space Pavilion at the Exhibition of National Economic Achievements in Moscow. But the pavilion is now home to a fair for gardeners, where the closest thing to a space-age device is a titanium shovel. The recently opened Cosmonautics Memorial Museum has some interesting documents and exhibits, but they look insignificant and provincial compared with the contributions Russia has made to space exploration. The museum would greatly benefit from the return of important artifacts of the Soviet space program that were - whether fairly or unfairly - sold at auctions.

The prominent journalist Vitaly Golovachyov, who reported on Gagarin's flight half a century ago, maintains a list of the treasures we have lost in the last two decades. This obscenely long list contains all kinds of things, from the watches and undergarments of cosmonauts to a lunar rover, samples of the moon's soil and the Buran shuttle, which was used in 24 test flights.

The 50th anniversary of Gagarin's historic flight provides a good opportunity to pause and reflect on at least some of the invaluable objects that have been bought by foreign collectors over the years: a handwritten copy of the speech Senior Lieutenant Gagarin delivered before the members of the Government Commission on April 10, 1961; a copy of his signed flight report; the watch presented to Gagarin by Marshal Konstantin Vershinin; a telegram from the USSR leader, Nikita Khrushchev, congratulating the world's first cosmonaut; Gagarin's military uniform and the space suit in which he performed preflight training.

Documents signed by Sergei Korolev, the chief Soviet spacecraft designer, and three dozen notebooks of his successor, academician Vasily Mishin, have also been sold. The notebooks, which Mishin sold to a mediator for $5,000 in 1991, fetched $211,000 at auction. No Russian buyers were interested in this or any other lot of space memorabilia.

This is unbecoming of a great space power. Russia is acting like a drunk on a bender who sells off his family's possessions to buy his next drink. Was it worth the money to auction off the descent module that crash landed in February 1977 with Viktor Gorbatko and Yury Glazkov on board? A cabin burnt by atmospheric winds sold for only $50,000 - a nice car costs more in Moscow. For some reason we sold part of the moon soil that three our spacecraft collected in the 1970s. Each of these 330 gram samples is of tremendous importance for science and history, and certainly more valuable than the $442,000 the moon soil was sold for. The space suit in which Alexei Leonov performed the historic docking with the Apollo spaceship in 1975 was sold for $156,000. The Speyer Technical Museum, with the help of the German government, acquired the Soviet-era Buran spacecraft for 10 million euros after a lengthy court battle, and built a special huge pavilion for it. The Buran is now the most popular attraction at the museum. Meanwhile, our own space shuttle was destroyed when the roof of a hangar in the Baikonur space center collapsed on it nine years ago.

Obviously, neither spaceships, space suits, nor official scientific documents can cross the border without a permit from the authorities. And yet it is impossible to find out anything about the procedure, even though these "exports" occurred quite recently. Inquiries by journalists are met with the standard answer: "Roskosmos (Federal Space Agency) is not responsible for monitoring the legality of exporting documents from Russia." Oversight bodies have no interest in who exactly signed the permits and under what circumstances. For example, a Soviet lunar rover, which never returned from the moon, was purchased by the American Richard Harriot for $68.5 thousand. The sale went through all the official channels and was approved, and yet all attempts to identify the seller in Russia have led nowhere. The Lavochkin Research and Production Association, which designed the rover, denies any involvement in the "deal of the century."

We're told that in the 1990s our cosmonauts and research centers were just trying to scrape by. This is true, but the early 1960s was no picnic either. The Gagarin era began just 16 years after devastating WWII ended. I remember not only the triumphant celebrations on April 12, 1961, when Gagarin became the first man in space, but also the long bread lines. Our country was not prospering when it sent Gagarin to space half a century ago. And now we look back on this heroic effort with pride.

What is to be done? The honorable thing to do would be to respect the memory of Yury Gagarin and even the mannequin Ivan Ivanovich and go to Sotheby's with checkbook in hand. We should try to reclaim at least part of the artifacts of the Gagarin era, currently held in foreign museums and private collections. After all, Russia can afford to splurge on such luxuries. Moreover, some conscientious collectors have expressed their willingness to sell back the rarities at the original price they paid. All Russian buyers have to do is ask... if they're interested.