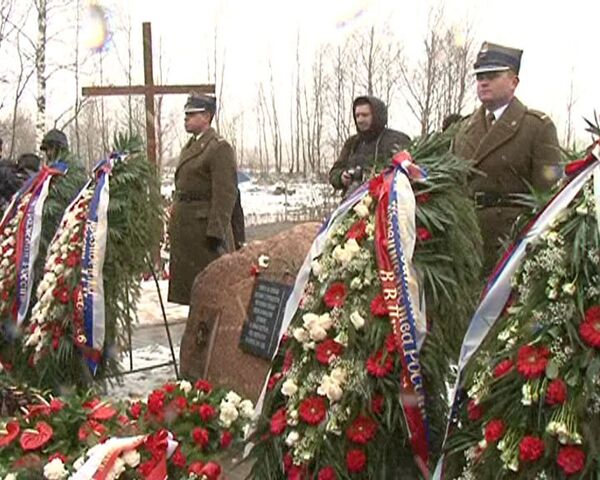 A day before the first anniversary of the plane crash that killed Polish President Lech Kaczynski and 95 others, the families of the dead visited the site of the tragedy in western Russia.

A day before the first anniversary of the plane crash that killed Polish President Lech Kaczynski and 95 others, the families of the dead visited the site of the tragedy in western Russia.

Just as it was on April 10, 2010, the weather was harsh and unforgiving, with thick fog, sleet and a biting wind accompanying a speech by Polish First Lady Anna Komorowska.

“We are in a place that will forever now remain a painful area for our hearts and memories,” Komorowska told the assembled relatives. “We can not change what has happened and we can not put back the clocks; we can only help one another.”

Everyone on board died when a Polish Air Force Tu-154 went down near Smolensk in fog. Kaczynski and the high-ranking officials were due to attend a memorial ceremony for the victims of the 1940 Katyn massacre, in which Soviet secret police killed thousands of Polish military officers.

“We have made a pilgrimage here today to visit two tragic places in the history of Poland - Katyn and the crash site of the presidential TU-154 plane,” Komorowska went on. “We continue to mourn for our people who died in this place.”

The memorial ceremony was attended by 103 relatives of the dead. The names of all those who perished were read out by a Polish military official. Komorowska and the bereaved relatives then placed flowers and candles at the crash site. They will then make their way to the Katyn memorial.

April 10 will see a day of national mourning across Poland.