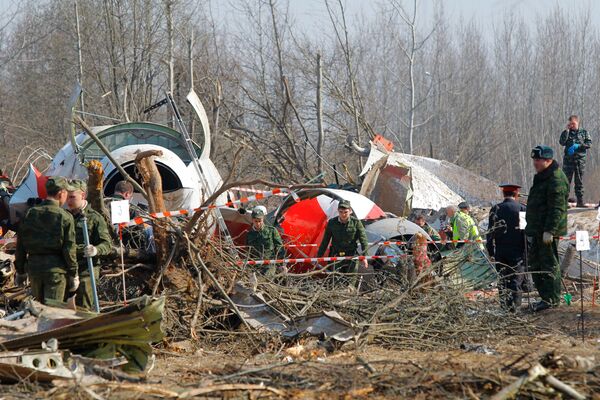 The families of people killed in last year's air crash involving top Polish officials are heading to the western Russian city of Smolensk shortly before the tragedy's first anniversary.

Polish media said relatives of 25 people who died in the crash will be present at a memorial ceremony in Smolensk, which Polish First Lady Anna Komorowska is also expected to attend.

The Polish Air Force's Tu-154 that was carrying then-President Lech Kaczynski and 95 others crashed in thick fog near Smolensk on April 10, 2010. Everyone on board died.

The high-ranking delegation was due to attend a memorial ceremony for the victims of the 1940 Katyn massacre, in which Soviet secret police killed thousands of Polish military officers.

According to official data, over 20,000 Polish officers were killed in 1940 by the NKVD - the Soviet secret police. The executions took place in various parts of Russia, Ukraine and Belarus. The largest massacre occurred in the Katyn forest near Smolensk.

The delegation heading for Smolensk will also visit the Katyn memorial.

The Kremlin said in March that Russian President Dmitry Medvedev will meet with his Polish counterpart, Bronislaw Komorowski, in Smolensk on April 11.

The Russia-based Interstate Aviation Committee (MAK) in January laid the blame for the Kaczynski crash squarely on the Polish side, and some politicians in Poland have since lined up to try to pin blame elsewhere.