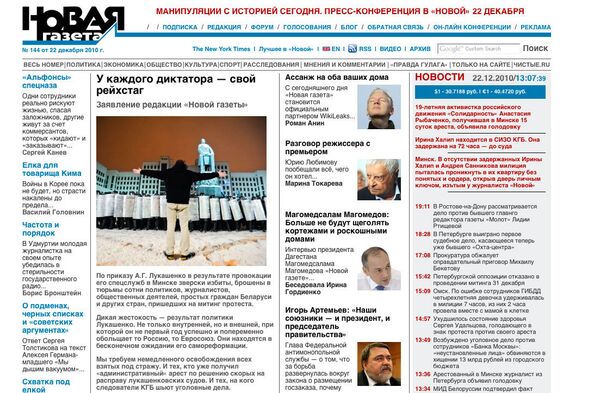 The website of Russia's leading opposition newspaper Novaya Gazeta may be moved to a different host after being the target of a massive cyber attack, its editor-in-chief said on Friday.

The website of Russia's leading opposition newspaper Novaya Gazeta may be moved to a different host after being the target of a massive cyber attack, its editor-in-chief said on Friday.

"There is a thoroughly pre-prepared cyber attack underway," Dmitry Muratov told RIA Novosti, adding that Internet security company Kaspersky Labs was working to fight off the attack, which began on Thursday. The paper's website cannot be accessed.

It is not clear whether the incident is linked to similar attacks earlier this week that took the Russian language version of LiveJournal offline for dozens of hours.

Muratov said the paper was ready to move over to a different host if the attack persisted.

"We wouldn't want to leave the .ru domain zone, but if this happens again we will be forced to do that," he said.

He said the paper was being targeted for its investigative journalism and also its new project, the Online Parliament of Runet. Runet is a commonly used name for the Russian Internet, which is free of government controls compared with traditional media and used as an outlet by opposition activists.

The aim of the parliament project is to bring some of Russia's most popular bloggers, including jailed former oil tycoon Mikhail Khodorkovsky and anti-corruption campaigner Alexei Navalny, into some kind of an alternative parliament that reflects the aspirations of Russia's people.

Muratov said the attack on the paper's website should be examined by police.

President Dmitry Medvedev, whose blog was affected in the attack on LiveJournal, demanded that those attackers were tracked down.